By Campus Times Editorial Board, Melinda Sanchez on September 22, 2000 in Editorials, Opinions 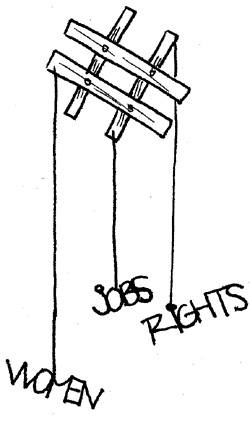 Overnight 11.5 million people became prisoners in their own home and no one came to their rescue. A mother was murdered for teaching her child how to read and the crime was considered patriotic. A civilian government worker died from the flu because she was denied treatment due to government restrictions. An elderly woman was brutally beaten with a cable, which broke her leg because her ankle was showing from under her clothing. One thing that connects all of these people is that they are women in Afghanistan.

In September 1996, women in America were going to school, working and enjoying their human rights. However, in Afghanistan an extremist military group called the Taliban implemented “gender apartheid,” which has caused the women of Afghanistan to lose their rights and in many cases their lives. As some of us were just starting our second year in high school women and young girls were denied the right to go to school or even learn how to read.

The Taliban banned women and girls from school, working and leaving their homes without a male relative for a chaperone. At all times they are forced to wear a burqua, shrouding their body from head to toe with a mesh-covered opening for their eyes. They are to be covered at all times and can be beaten by anyone if any part of the their body is shown. This burqua is so confining that it is impossible to tell one woman from the next and it is nearly impossible to see their eyes.

Not only are women and female children banished from education and the work place, but they are also prohibited from seeing male doctors. There are separate wards in hospitals for males and females and currently there are a few women who are able to practice medicine, but not enough for half the country’s population.

It is shameful that the lives of unborn children and their mothers are endangered when there is ample treatment. Getting medical attention is a human right and now dogs and cats in America have better health care than the women of Afghanistan.

These women have been reduced to ghostly shadows and now face mass genocide. What should probe conscience is that if this can happen in Afghanistan and continues to progress, when and where will it cease? If we do not take a stance to protect these women and their human rights then we are giving up on our own.

This is not part of the Muslim belief nor is it part of the culture of Afghanistan. Before the Taliban came into power the women were educated and employed. Afghanistan women were 50 percent of students, 60 percent of the teachers at Kabul University, 70 percent of school teacher, 50 percent of civilian government workers, and 40 percent of doctors in Kabul (the capital) were women. Women could choose what they were going to wear and did not have to paint their windows black and hide from the public in their own homes for being a female. Now they also have to wear silent shoes because woman are not to be heard.

What is not realized is this is a holocaust of innocence, educated woman and children. Some of these women had and have doctorates and now live in fear of being stoned to death, raped or even killed at any man’s desire. Not very many people are even aware of what is going on, let alone prepared to take action.

Now, 97 percent of Afghanistan women show signs of major depression. The Taliban labels suicides like drinking cleaning products or women putting their heads in the oven as accidental deaths. Mobility is no longer an option for the women of Afghanistan and they are powerless because their lives are considered worthless. Anyone who tries to leave the country without a male relative will be killed for causes of adultery.

Please do what you can to help these silenced women. You can get more information by going to www.feminist.org or calling (888) 939-6636 to receive a “take action kit” with more information on how to help. Any contribution of awareness puts these women one step closer to having basic human rights.