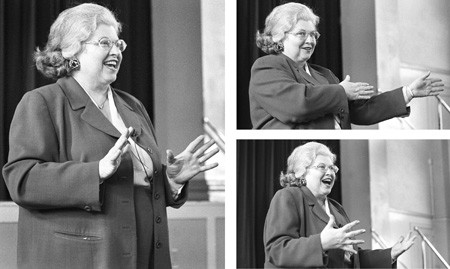 At the age of 26, Sarah Weddington, fresh out of law school was the attorney representing Roe in the Roe vs. Wade legal case, which led to the legalization of abortion. Weddington spoke in Founder’s Hall on Tuesday. The event was sponsored by the ASF Forum and the ULV debate team. Weddington was told no on several occasions for being a young woman and said, “When you hear no, you say I’ll try.” This determination led her to the Supreme Court on a case that is still being discussed 27 years later. Weddington was also the first woman to be elected to the Texas House of Representatives. / photos by Natalie Fowle

The 1973 Supreme Court ruling of the case Roe vs. Wade altered a major way of life when Sarah Weddington, then a 26-year-old rookie lawyer, argued her case to win in favor of a woman’s right to choose an abortion.

Living in Texas during a generation that viewed women as inferior to men, Weddington became the youngest woman in history to win an argument presented to the Supreme Court. She was also the first woman voted to the Texas House of Representatives and between 1978 and 1981, she was an assistant to former President Jimmy Carter.

On Tuesday, Founders Hall set the stage for distinguished speaker Weddington to speak about issues of “course correction,” abortion, the history of Roe vs. Wade, how issues have changed regarding abortion since 1973, and how the upcoming election may affect a woman’s right to choose. Speaking to her audience, Weddington managed to ease laughter from the audience even though she spoke on a serious topic.

Weddington touched on a subject she calls “course correction;” meaning it is acceptable for students not to know what they want to do with the rest of their lives. Weddington herself experienced various occupations and interests in life, and values each and every one of them.

“I do not believe you can sit here today and know what you want to do for your future,” she said as she addressed the audience. She said that instead, students should focus on what they can do to give themselves more options for the future.

Weddington dabbled with teaching eighth grade, but soon found it less than appealing. 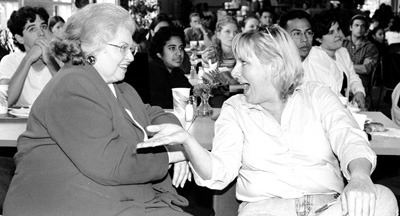 Weddington spoke to some female friends who had heard about a problem in Texas where a woman was not allowed to receive an abortion. In Texas, it was illegal to have an abortion unless it was necessary to save a woman’s life. Contraceptives were not available to women unless they showed proof of marriage within a six-week period. “Roe” stood for Jane Roe, an alias for a person, who later revealed her real name, Norma McCorvey. McCorvey had three children, the first two taken away by her mother and ex-husband. When she became pregnant for the third time, she decided she wanted an abortion, but legally, she could not have one. “Wade” stood for Henry Wade, the Texas District Attorney responsible for enforcing the anti-abortion statute. Weddington made the appeal to declare the Texas law unconstitutional. When she was informed that the case was going to the Supreme Court, Weddington said that she panicked. She worked for three long years on the case, researching countless briefs and practicing her oral argument during the early morning hours.

The first was the issue of whether there was a right of privacy in the United States Constitution. The second was whether the state had a compelling reason to regulate abortion, and lastly, whether pregnancy was considered fundamental in the overturning of a state law. The defense argued that the state had a right to protect unborn life. Countering that argument, Weddington stated that legally the fetus was never treated as a person, and that the time of birth was when life began.

After the trial was complete, Weddington received a call from a journalist from the New York Times asking if she had a comment regarding the case. Weddington had not yet heard the verdict of the trial, and the journalist on the other end of the phone had informed her that the court ruled in her favor in a 7-2 decision. 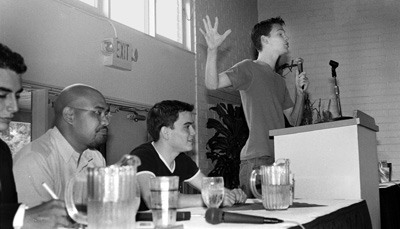 The court ruled that there is a fundamental right of privacy under the Fourteenth Amendment for women to make private decisions, and that there is no showing that the state has a right to protect unborn life.

Today, the justices of the Supreme Court are not as supportive toward Roe vs. Wade. Weddington said she felt that three judges are in favor, three are against, and three are undecided.

She said that she is concerned with who will be elected president in the upcoming election because whatever presidential candidate is elected into office can replace empty seats in the Supreme Court with their own appointees. Weddington said if George W. Bush is elected, who is openly opposed to abortion, he will appoint a Supreme Court justice who is also against abortion. She also said that if Al Gore is elected, he might appoint a judge who supports abortion since he is pro-choice.

University of La Verne students who attended found the speech both informative and inspirational. Even though they may have differing opinions, students were glad to attend and become informed on such a controversial topic.

“I admire the strength and dedication she had to accomplish her goals,” said freshman Kendell Smith.

Junior Mia Moore found Weddington’s speech very interesting. Moore said she was glad to have the opportunity to hear her speak because it was a famous case that had a major impact on society.

“I found her speech very inspirational,” said sophomore Demetric Brown. “It made me realize that if she could accomplish so much in life, I can have that same dedication to go after my own goals.”

Weddington, through her determination and perseverance, has managed to push open the doors for other women wishing to enter the field of law.

She is a well-known person, some admire what she has done for women; others despise it.

Despite the different views people may have about Weddington or abortion in general, it cannot be argued that her contribution to winning the case did not impact America and women for generations to come. Almost 30 years later, the case of Roe vs. Wade is still being debated and discussed.