By Kati Kelly, Tom Galaraga on November 17, 2000 in Sports, Volleyball 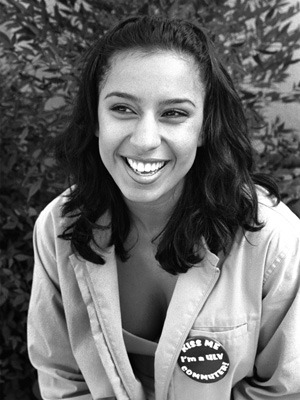 Adriana Contreras, a junior computer science engineering major at ULV, managed to keep her grades up, work for the Photography Department, volunteer at the Sunbridge Convalescent Home and devotedly practice for the women’s volleyball team 1:30 to 4 p.m., five days a week. She was named second team all-conference during ULV’s 26-2 season. / photo by Kati Kelly

With her hair tied up, flowing past her neck and falling just short of her shoulders, she dances gracefully on tiptoes as an awe stricken crowd watches her every move with anticipation.

Restricting clothing molds to her body, while allowing freedom of movement. While baring a perfect “10” on her back, she is more than certain she is going to score.

Enter Adriana Contreras, a junior computer science engineering major by day, and a Second Team All-Conference middle blocker for the University of La Verne women’s volleyball team by night. With her she carries an endless amount of energy that is readily identifiable in everything she does, both on and off of the court.

“Her energy comes from her passion for volleyball,” said Vicky Martinez, junior journalism major and roommate to Contreras.

While keeping an optimistic attitude toward volleyball and life in general, Contreras exemplifies the definition of “friend,” as she demonstrates her ability to bring positive outlooks into every situation, both as a friend and teammate.

“She is never down,” said Darla Franklin, senior liberal studies major and friend of Contreras. “We all have our moments, but Adriana never blames anybody else. She owns up to her own mistakes.”

Although returning to the team as one of the key players, Contreras does not allow her previous volleyball experience to inhibit her ability to grow as a player.

“I wasn’t expecting to earn Second All Conference middle blocker,” said Contreras. “I didn’t feel that I had performed up to my ability to earn that title.”

Having also earned First Team All-Miramonte League honors as a player during her junior and senior years while attending Garey High School in Pomona, Calif., Contreras said that there is always room for improvement.

“She is always seeking criticism from people, both good and bad,” said Martinez.

Contreras, who according to Franklin “needs a little push to encourage her,” finds the support she needs from her friends and roommates, who have yet to miss a game.

“Before coming to her games, I didn’t know anything about volleyball and I didn’t really care,” said Martinez. “But now I love it, we haven’t missed one game.”

While seeking encouragement and criticism from friends and coaches, Contreras admits to having insecurities about her abilities.

“When I screw up big time, I can’t live with it. It’s in the back of my mind,” said Contreras “Why? Because volleyball is more than a game to me. During volleyball season it’s practically my life.”

With volleyball being an essential part of Contreras’ life, she attributes the bond between teammates to the emotional ties that the season has offered. For Contreras, the season has produced experiences and memories that she will carry with her throughout her lifetime.

“It’s been a [emotional] roller coaster, we are trying to break through these barriers,” said Contreras. “We have expectations, and after I have a bad game I ask myself ‘Do I belong here?’ But after a good match, like against Hayward, I feel like ‘Yes I do belong here.’ ”

With the belief that negativity can be very harmful to a team and individual, Contreras has been a source of positive energy for the team.

While avoiding negative connotations that can so often become associated with competitive sports, Contreras keeps an optimistic view for the team and its members on an intimate level. It is this positive energy that keeps the team on both a competitive and a personal level. Contreras’ optimism echoes loudly through her life as a volleyball player and student.

Although her team was defeated by the Loggers of the University of Puget Sound in the West Regional Championships, Contreras has high expectations for the next season.

Contreras will return next year for her fourth and final season as part of the University’s volleyball team.

“Next year we are going to be awesome,” she said.

The dance is almost over, and with it the end of a game draws near. With every leap and bound she helps to draw the team closer to victory. While wearing the number “10” jersey for the women’s volleyball team, Contreras is certain of two things; the game of choice is volleyball, and the courts are her playground.