By Campus Times Editorial Board, Christian A. Lopez on November 10, 2000 in Editorials, Opinions 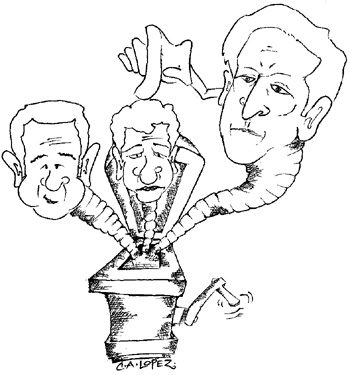 America, the land of choice, voice and Democracy. Immigrants flock here by the millions each year in awe of the rights and the power the people possess.

Tuesday, Nov. 7 presented American voters with the opportunity to choose the 43rd president of the United States.

It is unfortunate that Election 2000 proved to decide not who the best candidate is to rule the ‘Free World,’ but rather that neither candidate (nor any of the third party candidates) possess the qualities that Americans require in their President.

Voter turnout this year was impressive, however, a negative aura filled voting booths as Americans clothespinned their votes to avoid the lesser of two evils. Instead of supporting the best man for the job, Americans were settling for the least worst.

Republicans and Democrats complain that third party candidates are a wasted vote and that a vote for one of them could result in the victory of the wrong candidate.

None of the third party candidates prevailed, but the fact that they exist makes America the democratic nation that it is. Nader did not steal valuable votes from the two majority parties, the Republican and Democratic candidates simply failed to convince Nader’s supporters that they were better candidates for the presidency.

Every vote counts. The election is so close that the overseas ballots may decide the election. But unfortunately for residents of Palm Beach, Fla., their votes may not be counted. It is currently being disputed by voters, candidates and the country that unclear ballots resulted in over 19,000 mistaken votes.

Paper ballots not only resulted in unforgiving votes for the wrong candidate, that in this election could have been the deciding votes, but also presented America with an undecided winner for the presidency.

Because of the miniscule margin of victory between candidates, Florida state law mandates the state recount. The paper ballots along with the postmarked absentee ballots are the cause for the 10-day recount delay.

Well, unfortunately, the people could be defeated and overlooked. The presidential electors meet on Dec. 18 to actually elect the new president.

The Constitution in 1787 maintained the idea of the electoral college in article two, section one. It was justified by the idea that many voters lacked the education and knowledge of candidates to choose the president wisely.

Today, even 18-year-old voters enthusiastically view Internet sites, attend political speeches and rallies and read the newspaper to prepare for the responsibility their country has bestowed upon them.

Maybe the 18th century electoral college system should be reevaluated.

The electors who the people chose to represent them may decide to honor the will of the people and elect he who received or receives the greater of the popular vote.