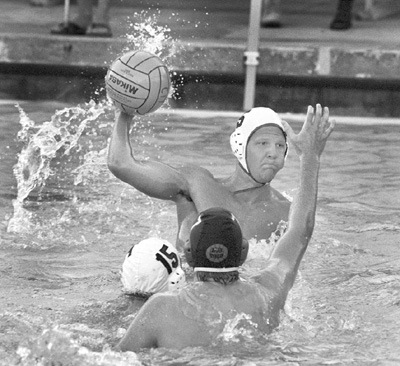 #5 Sean Smith of La Verne rises above teammate #15 Jason Walters and #7 Erik Granstedt of Caltech for a shot on goal. La Verne would go on to win 16-8. / photo by Jason Cooper

With a seven-game winning streak, the University of La Verne men’s water polo team hopes the rhythm it has will propel it victoriously through the Southern California Intercollegiate Athletic Conference Championships.

“As long as we keep going with our heads up by playing our ball, we can take conference [championships],” said junior Rey Lopez.

Last Friday the team demonstrated its triumphant rhythm when it oppressed opponents with victories over Santa Clara University and Caltech.

In the first game, the Leopards battled the visiting Santa Clara Broncos, and though the game was held tight through three quarters, the Leopards closed out the game in the fourth, winning 10-7.

A strong offensive effort at the end of the third quarter allowed the Leopards to advance by several goals, and the Broncos were unable to come back from this three-point deficit.

“We could have put some goals into their goal, and stopped a few from going into our goal,” said Santa Clara head coach Steve Hanson.

Breaking out to a 2-0 lead in the first quarter, the Leopards posted strong offensive efforts led by Brady Kocher and Alan Shumway. Defensively, goalie John Steifling contributed six saves, while Tom Merryman, Sean and Stephen Smith and Kenny Clements each had one steal.

Early into the second quarter, Santa Clara’s Jay Moorhead responded, scoring from a four-meter opportunity, and then senior Kenny Flanager tied the game at two when he battled past Clements to score on an open goal.

The Leopards reacted, however, when senior holeman Fred Sicard turned on his defender and scored with 3:05 remaining, bringing the score to 3-2. After the Broncos scored once more, Clements drew an ejection off Santa Clara’s Matt Reilly, and with three seconds left, Kocher scored his second goal of the game, putting the Leopards up 4-3 at the end of the first half.

“We weren’t expecting anything from them,” said Lopez. “We weren’t into it [in the first half]. We were giving enough only to stay in the game.”

Thirty seconds into the third quarter, Moorhead scored his second goal to tie the game at four.

To regain control of the game, the Leopards fronted a series of offensive efforts at the end of the third quarter. Goals from Shumway, Clements and Merryman put the Leopards up 7-4.

“They play well together,” said Hanson. “They have good team chemistry, they work hard, and they are well coached.”

The Leopards finished off the game in the fourth quarter, after scoring three more goals, and with the Broncos posing a minimal offensive threat, the Leopards were victorious 10-7.

“[With this game] our season is over,” said Hanson.

Facing the Caltech Beavers in their second game of the day, the Leopards played with low intensity in the first quarter, but eventually began to play more aggressively in the last half, dictating the play and winning the game 16-8.

After the first quarter of play, the game was tied at four goals. But as the game progressed, they ignited and pushed ahead of the Beavers.

“We came out really slow, and we weren’t working together,” said Lopez. “But as the game proceeded we began to play better as a team.”

The Leopards demonstrated control of the game after the first half, and with closing strength, they finished the game with 16 goals.

“We wanted to play with more dignity and pride,” said Lopez. “Our score was high, but we could have gone over 20.”