By Campus Times Editorial Board, Christian A. Lopez on November 17, 2000 in Editorials, Opinions 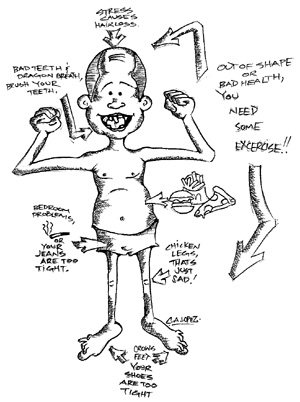 For people affected with medical problems including diabetes, Parkinson’s and strokes, throughout the country, the question of why they are struck with the disease is foremost in the minds of the afflicted. Recent scientific studies may be closer to answering these questions, but the answer is not going to be popular: people are causing their own diseases and have no one to blame but themselves.

In the Nov. 6 edition of the Los Angeles Times, an article was written describing the link between Parkinson’s disease and toxins in the environment. The study, which dealt with exposing rats to a widely used pesticide, links commonly used environmental toxins to the disease, which is the most common neurological disorder after Alzheimer’s.

Parkinson’s afflicts more than 1 million Americans a year and causes the loss of muscle control as brain cells produce less of a hormone that is necessary to normal nerve functions. Currently, there is no cure for Parkinson’s.

In the same issue of the Times, another study, compared diabetic Mexican-Americans in Texas to Mexican citizens. In the study, it became apparent that the “American lifestyle” can result in a significantly higher diabetes risk.

Mexican-Americans, who ate fatty food more often than their Mexican counterparts and did significantly less strenuous work, suffered from a higher rate of diabetes.

More recently, a study has linked over-the-counter drugs with strokes in young women. Many cold medicines and diet pills, including Dexatrim and Triaminic, contain the ingredient phenylpanolamine, or PPA. This ingredient, which is soon to be banned by the Food and Drug Administration, has been found to be a contributing factor in hemorrhagic strokes, especially in young women.

In fact, what these studies show is that the American people are simply reaping what they have sown in the past few decades.

As people have introduced the pesticide linked to Parkinson’s, they have become more widely afflicted with the disease.

As people have gained weight over the years, while reducing their exercise and leading a more leisurely lifestyle, the diabetes affliction rate has gone up.

As young women have become more body conscious, they have increased their use of over-the-counter diet drugs. A result of this use is the increase in strokes in the young women using these pills.

There are many other diseases that directly result from factors that we have made a part of our lives voluntarily. We sink millions of dollars into disease research. Perhaps we should use some of this money to look into alternate pesticides that are not a risk to our health. Maybe we should educate our children early, teaching them that an unhealthy lifestyle can result in diabetes. Or, we should not create an atmosphere that makes women think that they must take diet drugs to fit the stereotype of “beautiful” that Americans hold.

It is clear that many of the diseases that are feared are being caused, at least partially, by elements that we have control over. If we really want to do something to decrease the number of these cases, all we need to do is examine ourselves, our lifestyles and our environment. Then, all it takes is change, and we may be able to stomp out some of the most deadly health risks that exist today.