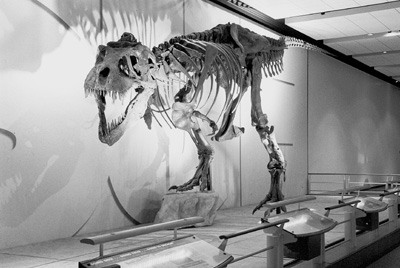 The Los Angeles County Natural History Museum featured Sue, the largest and most complete skeleton of a Tyrannosaurus Rex. Sue was purchased from a private party by the Field Museum in Chicago, with financial help from McDonalds, Walt Disney World Resorts and private investors. / photo by Tom Galaraga

Her 12-inch teeth slice sharply through what would be considered a feast for most, however serve her as only a mere appetizer. Her actions have defined her identity, and after being taken from the Greek and Latin terms meaning “tyrant lizard king,” she reigns over what people would one day refer to as the “late cretaceous period.”

Fortunately for the entire human species, she has been extinct for approximately 67 million years.

Meet Sue, a Tyrannosaurus Rex whose name was taken from the “amateur fossil hunter” responsible for finding her, Susan Hendrickson, and she is currently the Natural History Museum of Los Angeles’ newest addition on display.

Weighing an estimated live weight of seven tons and a length of 42 feet, Sue’s call to fame has been the fact that she is one of the most complete and largest examples of a Tyrannosaurus Rex’s fossils ever found.

According to the Natural History Museum’s “Sue” website, “most of Sue’s bones are in excellent condition and have a high degree of surface detail. Sixty-seven million years after her death, it is still possible to see fine details showing where muscles, tendons, and other soft tissues rested against or attached to the bone.”

The fossils, which were discovered in the Hell Creek Formation of South Dakota on Aug. 12, 1990, were a source of controversy for some time. Due to disputes over land ownership, the rights to Sue’s fossils were not determined for five years. The fossils were found on land that had belonged to a private rancher, but because the land was part Sioux Indian Territory, Sue’s rightful owner had yet to be determined. The land that was owned by the rancher, and that was part of Sioux Indian Territory, was held in trust by the U.S. Government, and because of that trust, courts decided that the proper owner of Sue was the rancher.

The rancher then decided to sell the fossils at a private auction, and with the financial help of McDonalds, Walt Disney World Resort and private individuals, Sue was purchased from Sotheby’s Auction house in New York on Oct. 7, 1997 for $8.4 million by the Field Museum of Chicago.

According to the Field Museum of Chicago, “without this team effort, Sue might have ended up someplace where her bones could not be studied by researchers or seen by the public.”

The Sue exhibit made its debut on May 17, 2000 at the Field Museum in Chicago, and with the help of the McDonalds corporation, Sue traveled throughout the United States, and is on display in Los Angeles until April 22.

“The skeleton on display is the real thing. Not a plastic model or a plaster cast. Not a patchwork or composite of bones from different specimens,” according to the website.

The exhibit was geared toward children ranging in age from about 5-12. The Sue exhibit offered enough information to keep even an adult with a short-attention span occupied.

A short feature film documenting the discovery of Sue and the process needed to prepare the fossils for an exhibit was shown in an auxiliary room, just west of the main exhibit. In this auxiliary room, a replicated ‘dig site’ was on display to give younger children a chance at playing “fossil hunter.”

The Sue gift shop is “conveniently” located in the same auxiliary room, with stuffed dinosaur toys and Sue games on display that were hung just out of reach of small children, but priced well into the mommy and daddy’s “don’t touch that” range.

The Natural History Museum of Los Angeles is located at 900 Exposition Blvd. in the city of Los Angeles. For more information call (213) 763-3426.