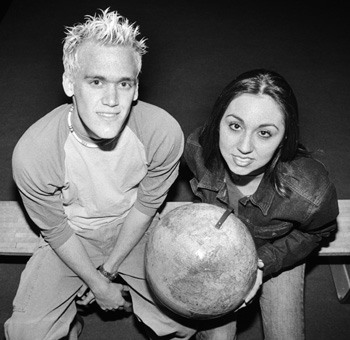 England and Spain were among the five countries from around the world that University of La Verne students studied at last semester. Junior Tom Hilton spent last fall at Cheltenham and Gloucester College of higher education outside of London and senior Isela Peña attended the University of Barcelona. Others studied and continue to study in Greece, Ecuador and France. This semesters, La Verne will send 16 more students abroad. / photo by Jason Cooper

Traveling abroad to experience a new country may be a dream to some students but to students at the University of La Verne it can be a reality. The study-abroad program at ULV allows students to travel to 10 different countries through out Europe, Asia and Latin America.

ULV allows students to study abroad though the Brethren Colleges Abroad [BCA] program. The BCA has been sending students abroad since 1962. It consists of seven-higher education schools, including ULV, that have had “historic ties to the Church of the Brethren,” according to a BCA pamphlet. Many who have participated in the program have had good experiences.

Senior Isela Peña traveled to Spain last fall for a semester at the University of Barcelona. Instead of living in a dormitory with other students, she lived with an elderly widow.

“It should be people who can adjust easily to there surroundings and are open to all kinds of different people,” said Peña, on what type of people should study abroad.

“It’s been [an] overwhelmingly positive [experience]. I think I can safely say that we have never had a student as long as I have been working with it, who came back and didn’t have a wonderful experience,” said Al Clark, associate vice president of academic affairs.

Those interested in studying abroad have the option of choosing between China, Japan, India, Greece, England, France, Germany, Spain, Ecuador and Mexico. Those students who do not speak another language can still travel to England, Greece, India, Japan and China.

In China and Japan, students attend the Foreign Language University to study Chinese and Japanese. Other countries require that the student be fluent in their language. Students who are language majors have first priority, since studying abroad for a year is one of their major requirements.

The cost for study abroad is very close to the cost of living at ULV. In the 2000-2001 year the cost is $12,700 per semester. Most financial-aid awards can be applied for the study abroad program. The cost includes the 19-meals-a-week plan, and board in a dormitory or with a host family, depending on the different countries.

There are 33 semester slots a year available for undergraduate students. About 27 or 28 students go. Students who apply must have a grade point average standing of 2.5 or above.

“Only once, in the 10 or so years I have been working with this program did we ever have more applicants than slots available, the truth is everybody gets to go who applies,” Clark said.

Often students who study abroad get homesick or culture shocked because there are a variety of rules and customs that are different from the United States. Peña, who speaks Spanish, said that even though she knew the language, it was still hard to adjust to at first. “You get more of a culture shock if you already do speak the language, you expect it to be the same as your culture but it is [a] totally different tradition,” she said.

“The university classes are pretty advanced, because the high schools there are already prepared and have a concentration and major. The BCA courses are pretty easy and the teachers really help you out, they’re like an extension of La Verne,” said Peña.

While abroad, Peña said she learned a lot, enjoyed herself and would like to visit Spain with her family one day. “The thing I liked the most was the food, it is pretty much all seafood. It tasted really good,” said Peña.

Those abroad, who have questions, need help or someone to just listen to them, always have access to a regular director at each site located in the BCA office. Most of these colleges have fax machines, phones and computers that help students keep in touch with their family and friends.

“There are many programs out there but this particular one is right for us. It’s our program but I have looked into many other programs and it provides the most and is most like being at La Verne in terms of the kinds of support one would expect,” said Clark.