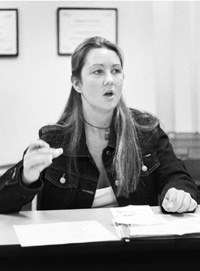 As accountant for the Associated Students Federation (ASF) Forum, Shellie Etheridge deals with allocating the use of ASF’s $126,000 annual budget. She has held this position for two years. / photo by Jen Newman

For most students, having a full-school course load, a part time job, social time with friends and homework rarely leaves time for extracurricular activities. However, senior Shellie Etheridge has defied all assumptions that students have no time to get involved.

Etheridge is a social science major and psychology minor. Over the past four years, she has served as a resident assistant, a Spotlight Weekend Leader, Orientation Week Leader (OWL), accountant for the Associated Students Federation (ASF) Forum, a Grad Marshall, Commuter Activities Program Assistant and holds two positions in her sorority, Phi Sigma Sigma. She currently serves as the Panhellenic Vice President for all three sororities on campus, Sapphire Ball Chair and Judicial Board Representative for Phi Sigma Sigma. She just finished a 17-unit fall semester and is currently taking a 13-unit load.

“I knew these would be good things for me to do. They’re fun, they’re right up my alley and they match my personality,” she said. “In some jobs I get to be a mentor and a leader, which is a really big honor.”

She recently applied to be a chapter consultant for Phi Sigma Sigma, which has 111 chapters nationwide. Etheridge said she just got news that she will interview for the position in Florida. If she is hired, Etheridge said her job will include traveling across the nation to counsel and evaluate other Phi Sigma Sigma chapters. The position will consume a year of her time following graduation. Etheridge said she hopes to find out in May if she has received the position. If not, Etheridge has plans to take a year off and continue coaching gymnastics, as she does now as a part-time job. She plans to earn her master’s degree in order to be a marriage and family counselor. 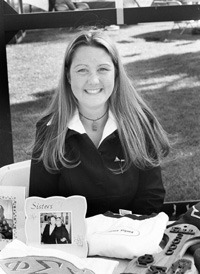 “It does get very difficult to juggle everything,” she said. “I don’t sleep much; I don’t eat much.”

Etheridge, who has previous gymnastics experience, has been coaching gymnastics since she was 16 years old, and is currently working for the city of La Verne. She coaches children from 3 1/2 years old to high-school age students three days a week. She said her favorite group to coach is the demo team, which consists of girls who perform competitively.

Etheridge said she was not always so involved in school activities. She commuted as a freshman and found herself just attending classes and driving home. Once she became a R.A., that all changed. She also joined Phi Sigma Sigma that year, which introduced her to new experiences.

“I think living on campus is what started to change it,” she said, “because more opportunities were thrown my way. I was here all the time so I heard about things to do.”

Etheridge said her senior year is the most involved she has been thus far. She said that although she really does not have the time for everything, she does the best she can with managing her hectic schedule.

“I keep meetings on separate days and try to prioritize what is really important,” she said. “If events overlap, I try to choose which one is more important.”

She said it is important to get involved because there is always a need for leaders to help people. 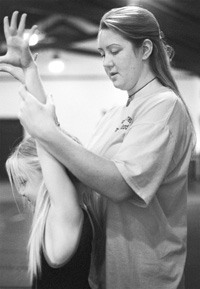 She manages to take 13 units in her senior year, as well as working with the city of La Verne’s Gymnastic Program 10-12 hours a week, where she coaches more than 150 people. Above, she works with Becky Stocking, age 9. / photo by Jen Newman

“I have the ability to lead people,” she said. “I have that desire to help people. I have learned so much by being involved. I notice myself growing everyday; you just learn so much about yourself, ” she said.

Etheridge suggests that students who want to get involved should look at what interests them. “First you need to find out where your heart lies, then find out if we offer what you want here,” she said. “And if not, start one.” She said that school can be pretty boring without getting involved in something.

“I hope I left my imprint and my memory on ULV when I leave,” she said. “This semester I learned that I had actually been a role model to some women and I didn’t even know that. I cried when I heard that.”

Despite her busy schedule, Etheridge has a strong passion for dancing and painting, two hobbies she said few know about. She takes dance classes at a dance studio when she can, and also loves to paint crafts such as picture frames, lamp shades and pictures. She also loves to read Danielle Steel books, and hopes to find time to indulge in her hobbies over summer.

“Being a leader is one thing, but being a servant leader is another thing,” she said. “I give myself, whatever you need to do I’ll do it. I just do things; I don’t expect anything from it.”