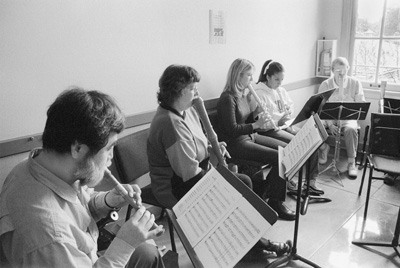 Yoshio Kitazawa, soprano recorder, Anita Hanawalt, bass recorder, Erin Parson, alto recorder, Stephanie Abeyta, alto recorder and Mary Blocher, bass recorder, are part of the University of La Verne’s Recorder Ensemble. The ensemble performed Wednesday morning in the hallway of the third floor of Founders Hall and filled the entire building with music. During their performance, the members performed “Intrada XXXIII” by Johann Ghro, “A Self Portrait” by Giles Farnaby, “Passamezzo Antico” by Nicholas Ammerbach, “16th Century Dances” from a manuscript in the British Library and “Spring Returns” by Luca Marenzio. All of the pieces were composed before the 18th Century and adhere to an “early music” theme. The ensemble is directed by Hanawalt and is composed of ULV students, alumni and members of the local community. The ensemble rehearses Thursday mornings in the Chapel. / photo by Tom Galaraga