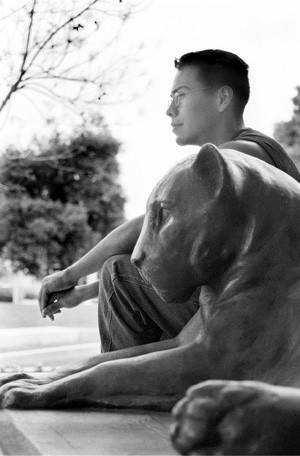 Mario Guerrero won the re-election over Anthony Granillo with a margin of 21 votes. / photo by Lauren Wooding

A 21-vote margin was all that separated the two candidates running in the second Associated Student Federation presidential election, and was all that was needed for Mario Guerrero to recapture the (ASF) presidency over Anthony Granillo.

However, the margin was not enough to silence Granillo, who has voiced his opinions regarding the fairness of the re-election.

“I would love to tell Anthony it [the election] was 100 percent fair, but I can’t do that. But I can say that it was fair,” said Michael Houdyshell, coordinator of student activities and commuter programs.

With an approximate 9 percent increase in participation at the polls during the second election, Guerrero attributes the increased student involvement to his and Granillo’s increased campaign efforts.

“Both Anthony and I realized the second time around that we had to go sell ourselves if we really wanted this position,” said Guerrero. “Originally I felt I did a good enough job that it would be an easy win, but as time progressed, Anthony turned out to be a hard opponent [to defeat].”

Guerrero, who believes that improvement in ASF is inevitable, said that although the re-election may have damaged his and ASF’s credibility, the decision to have a re-election should actually cause the inverse, demonstrating ASF’s commitment to the students and its belief in fairness. Granillo, who requested an unbiased re-count of the ballots, made the request on grounds that a number of individuals, who went to the polls, already had their names crossed off the list.

The reason for names being previously crossed off, according to Houdyshell, was because ASF was unable to obtain a new copy of the University’s student roster. Therefore, a photocopy of the list that already had names crossed off was used. Houdyshell admitted that this may have been a poor decision, however, he said that his primary concern was having the re-election as soon as possible.

“I have mixed feelings about that [the re-election]. I was the one who pointed out that it was unfair,” Guerrero said. “I think it damaged my image in a way because I am the spokesperson of ASF. People have to understand that government is not about one person, or at least our government isn’t. It’s about a group making decisions.”

“Overall, people took it more seriously. ASF members showed up for their shifts and we knew we had to get it right,” said current Vice President of Advocacy Kristine Werthwein. “Maybe it [the re-election] hurts ASF’s credibility. But mistakes happen.”

With an optimistic outlook toward next year, Guerrero believes that he and the new ASF forum will be able to make improvements over the current ASF Forum.

“The main improvement is more involvement,” said Guerrero. “Second is to plan ahead this summer so that we don’t have those events that crash. Also move people to understand that ASF has an impact on how decisions are made.”

“I believe it was a fair election and there is a winner and a loser. There is ultimately always going to be a winner and a loser, and unfortunately, Anthony was on the negative end of that,” said Houdyshell. “I officially certify Mario as ASF president for 2001-02.”