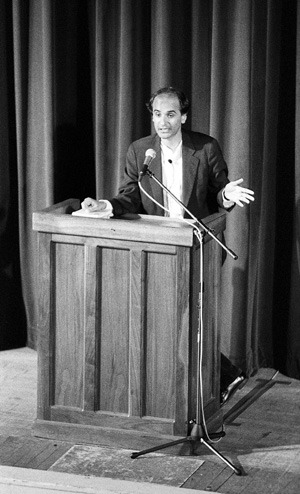 Pico Iyer, a renowned journalist who has written for publications such as TIME magazine and authored several books, including “The Global Soul,” discussed the impact of American culture and how its presence has affected other longstanding cultures. Iyer was available after his speech to sign his book and answer any questions that he was unable to answer. / photo by Tom Galaraga

With a subtle wit and a world perspective, acclaimed writer and essayist Pico Iyer spoke last Thursday in Founders Hall on topics of globalization, our world and the “Global Soul,” in his speech entitled “Globalization and the Food We Eat.”

Iyer, who himself is a global traveler, was born in England and raised in California by Indian parents. He is the author of six books and a regular contributor to TIME magazine. He has traveled all over the world, accumulating 1.5 million frequent flier miles on United Airlines.

In his speech, he brought forth his visions, journeys and personal experiences of the ever-changing world, focusing on the internationally rich aspects.

In one account, he shared how while visiting China, he noticed that as uncanny as it may seem, it houses one of the biggest Kentucky Fried Chicken restaurants in the world and is unlike any American one.

In reality he said it represented a part of a New World he called a”mongrel universe” because it was not exactly one culture but a mix of several. In America, the things one take for granted like a local fast food chain can be different and create a variety of different meanings and values when placed somewhere else.

“One thing that is interesting to me, and food represents this very clearly, is the ways in which the world has gone so internationally so quickly. All the cultures of the world come here and we have the same opportunity that previous generations didn’t have,” he said.

Iyer related how that 30 years ago, seeing so many different cultures within walking distance of each other was unheard of. Today one can walk in a neighborhood and have food or meet people from all over the globe.

“The best thing about globalism is that suddenly all of us have access to every culture of the world, so I wrote this book called ‘The Global Soul’ about people who come from everywhere.”

“Using the word ‘global soul’ is a way to describe how globalism can be something much deeper than just markets,” said Iyer.

Living in a country that thrives on the Internet, telephones and electronics Iyer said it is easy to take things for granted. Not every country in the world is similar or even close to the United States. In other countries, the ability to have clean water and food everyday is a struggle. Iyer said that three American individuals have the same net worth as 48 nations in the world. Six hundred million people have the same value of just three Americans.

“The one reason I travel is to see how most people in the world live. I think that in California we have a distorted perspective. It is easy to forget that two-thirds of the people in the world have never even used a telephone. For the time being their first concerns are the basic ones of safety, food and shelter and just looking after their children in the midst of poverty and famine and war,” he said

“In places like Ethiopia, Cambodia we see that people are living as if the last 2,000 years of history had not happened. When I went to Cambodia last year I saw that what they need more than anything in the world was a mosquito net. It only cost $5, but it can save three lives every day,” said Iyer.

Iyer related stories from his books and travel. He read a passage from his book about the day his house burned down and he met his neighbors for the first time who were illegal Mexican natives. They were living in a trailer for more than 20 years just trying to work and raise money for their families in Mexico, who they only saw once a year. Like him, they really did not have a home either to get money for their family they had to be away from their homes.

“Globalism is taking place on two levels at once. There are people like me who actually got to travel around the world and get all these opportunities that were unimaginable not too long ago. Then there are people who are like my neighbor who are propelled out of there homes for of all reasons by poverty, by famine or by war.”

“I found what I didn’t now before which is the number of refugees have gone up tenfold. There are a 100 million people in the world who are refugees who really don’t know where their home is propelled out of there homes into places that are completely strange to them.”

Iyer expressed the importance of the ever changing world that is becoming more international and how the combing of cultures and backgrounds affect different countries. With a world traveler’s vision he brought forth a knowledge that many have never experienced before. The growing community of diverse cultures intermixed is inevitable and that in the future it will be much harder to tell what anyone person is. He related the example that if a German man married a woman from Japan and then they moved to California and had a child the views and culture of their child would not be exactly German, Japanese, or American it would be a total mix of all.

“The new century is a exciting as any century has ever been and we can all live a life of what seemed like science fiction to even our parents, but at the same time in order to make the most of it we have to ask fundamental questions,” said Iyer.

In the News
Students need to be responsible