By Campus Times Editorial Board, Christian A. Lopez on May 4, 2001 in Editorials, Opinions 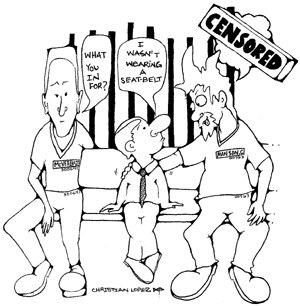 The United States Supreme Court ruled on April 24 that the police have the constitutional right to arrest and handcuff individuals for minor traffic offenses and take them to jail.

The 5-4 ruling upholds the arrest and jailing of Gail Atwater, a Texas mother who was taken into custody because she and her two children were not wearing their seatbelts.

In Texas, this is an offense that constitutes only a $50 fine. Instead, Atwater was booked, had a mug shot taken, was forced to take off all of her personal belongings and empty her pockets and was put in a cell before posting a $310 bond and was released.

She later pleaded no contest to the seat belt offense and paid the $50 fine.

The Fourth Amendment protects the public against unreasonable searches and seizures, but the court ruled that Atwater’s rights were not violated.

“The question is whether the Fourth Amendment forbids a warrantless arrest for a minor criminal offense, such as a misdemeanor seat belt violation punishable only by fine. We hold that it does not,” Justice David H. Souter wrote for the court majority. The court is basically saying that a person can be arrested for minor traffic offenses if the police officer feels it necessary because of the harm that may result.

If the Fourth Amendment does not forbid this, then what does it forbid? This decision is giving all too much power to the police force that is already condemned for abuse of power. Not only can a person be put to jail for not wearing a seat belt, the police can search a car after pulling it over for a minor offense such as a broken taillight.

Whatever happened to “reasonable cause?” Police should have a legitimate reason to search a person’s car and a justified reason to make an arrest.

If a person gets pulled over for a minor traffic offense, they should not have to get out of their car or let an officer search it unless it is obvious that the driver is drunk or has drugs in eyesight.

Vehicles are owned by the citizens that drive them and the police should not have the right to go through a person’s private possession.

Justice Sandra Day O’Conner was quoted in the Los Angeles Times, saying that giving police “unbounded discretion carries with it the grave potential for abuse. A relatively minor traffic infraction may often serve as an excuse for stopping and harassing an individual.”

The more power the Supreme Court gives to police means the less rights that the public has. In the future, we can expect an increase in police stops based on race and superficial reasons merely so that the police can search cars, something that none of us would want to deal with.

A person should not be sent to jail for an offense that would not send them to jail after convicted. Police across the nation should take more time trying to put murderers, child molesters and rapists in jail and stick to giving those of us who forget to put on our seatbelts a mere ticket.