By Campus Times Editorial Board, Christian A. Lopez on May 18, 2001 in Editorials, Opinions 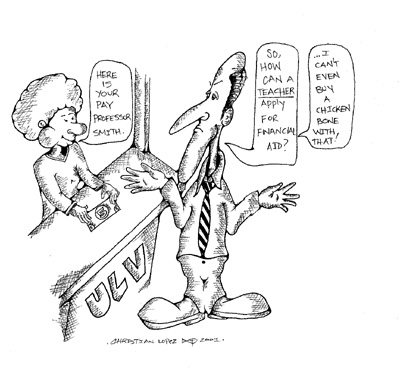 There are too many professors who are leaving the University of La Verne to go to other schools that will provide them better financial opportunities than apparently ULV is able to.

Just this year the university is losing Jim LeSueur, Deborah Burris-Kitchen, Gloria Morrow, Shawn Kirschner, Christina Ayala-Alcantar and June Marsh for varying reasons. And these are the ones we know of. Many of them are lured by better financial incentives from larger universities.

These are tragic losses.

While quality professors remain at ULV, and others will come, the questions of what can be done to prevent this should at least be asked to prevent such quick turnover amongst faculty.

Money may not be the only reason. For instance, there have been several professors who have made progress in academic writing or publishing. For instance, professors like LeSueur have written books in their particular field of expertise, like political science.

LeSueur will leave at the end of the semester to teach at the University of Nebraska. For him, teaching at Nebraska will provide him an opportunity to work in a larger department. It will also avail to him time to do more research for writing and provide more opportunities. It will also offer him sabbatical opportunities sooner than he would have been able to have at ULV. For a professor to be eligible to go on sabbatical here at the University, they have to have taught at La Verne for six years to be eligible in their seventh.

Another professor leaving is Gloria Morrow, who will now be teaching at Cal State Fullerton. Like LeSueur, in addition to teaching, she will also pursue her own research interests.

One of the biggest factors that make many of the professors leave ULV has to do with money. Despite raising tuition every year, it is not enough to pay faculty salaries. The money for tuition goes to other areas as well, not just for salaries.

Another factor is that with La Verne being a private institution, it does not get any funding from the government. Monetary sources come from donors and other sources. Therefore, there is not enough to provide for professors that are interested in doing research.

In other institutions, many of the schools have the financial resources because they have funds that are given to them by the government. However, professors have to work hard at other universities because teaching is an even bigger priority because professors there are measured by how many grants they can get as well as publish works related to their field of teaching, which is not the case at La Verne. Here, for those who have embarked on doing special projects, they must seek grants outside of the University due to lack of funds.

Professors may also leave to pursue other career interests, however, it should be obvious that those who choose to teach at ULV, do it not because of the money, but because they truly love what they do at La Verne.