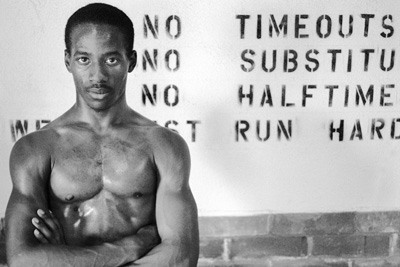 Clinching four SCIAC track and field titles for the University of La Verne, undeclared major, freshman Eric Thomas will be advancing to the NCAA Division III Nationals hosted by Millikin University in Decatur, Ill. Thomas will compete in the 4×100 relay, 200-meter, and 400-meter open on May 24, 25, 26. / photo by Liz Lucsko

by Alisha Rosas
Editor in Chief

It is not about winning or losing for freshman track and field athlete Eric Thomas. It is only about running against the clock.

“I came here because La Verne has a nice environment. When I got here, the coach was really nice and it seemed like the type of place I would be comfortable in,” he said.

Thomas recalls what track was like for him at his alma mater, Point Loma High School.

“The experience was different because when I was in high school, for one thing, we ran on a dirt track. I [also] was never a really good runner. I was always good enough to do well, but then in my senior year, I got better.”

Determined to improve his times, Thomas spent his summer vacation and the fall of his senior year working out and training for his final track season in high school.

His hard work and dedication resulted in a significant time improvement that year. When Thomas ran on that dirt track during his final year in high school, he improved dramatically from 22.7 to 22 seconds flat in the 200 meter race.

Such an improvement was noticed by the same coaches who Thomas had asked advice from on how to improve as a runner. They began asking him what he had done differently, training wise, to improve to that degree.

Thomas said that the only thing he did differently to prepare himself for the season was to work out according to his own agenda.

“I would come up with workouts that would just work on my overall speed. I know some runners, they’re power runners, they do a lot of weights on their legs, and I’m not really much for lifting weights with my legs because I figure I run enough during the day, I don’t need to go back and lift too,” he said.

“He was not very good in high school,” said track coach Pat Widolff, “that’s why he was not recruited by bigger schools. I think he took that as an insult, and was even more determined to show that he could run just as good as anybody at the bigger schools.

“So he worked out on his own all fall and it really paid off because he set our school record in the 400 and just won four events in conference,” Widolff said.

In terms of how fast Thomas runs, he said that the competition of who he runs against is not what stirs his drive, but rather it is the skill of running itself, that motivates him to be faster.

Widolff said that Thomas’ dedication to the sport is obvious.

“He has really high goals in life, both in school and in track, of course,” he said. “He has showed me that if you believe in yourself and work hard, [that] you’ll be able to achieve those goals. He’s really a great guy on the team.”

Thomas said that he has learned many things about the sport from his coach and believes that his improvements in track, which escalate with every meet he participates in, have much to do with what he has learned.

“[Widolff’s coaching style] works for me,” he said. “I would have complained, if I wasn’t running better. I’ve learned a lot since I’ve been here about running. I know that most people think that running, especially for sprints, is you go, you get on your blocks, come off fast and you run the race as fast as you can. But it gets a lot more technical than that.

“I know it seems simple, but some of the techniques [of running properly] are subtle. Like, the coach is always telling me how I run with my toes down, and you’re supposed to run with your toes pointed up. It doesn’t seem like a big deal, but it makes a dramatic difference in the way you run.”

With what he describes as a “mellow” demeanor, one should not be surprised to recognize how well Thomas handles a busy workload.

Besides sports and academia, Thomas has worked at the local Circle K since December and maintains a work-study job on campus in the Athletics Department.

“It’s [working while attending school] hard because I’ve had to change my schedule so many times,” said Thomas. “It is hard trying to balance the time for school, the work study, practice, work and homework.”

As far as academics, Thomas described himself, “I’m not really a good student because I’m really lazy about it a lot of the times. But the work is only as hard as you let it be. If you just work at it, you can always finish it. With practice, I mean, track is my love. That is my sport. That is the only sport I will ever do, and I love doing it. Practice is never too hard,” he said.

Thomas is currently undecided in terms of a major, but said that English is definitely a consideration.

“If I do not major in it, I will minor in it,” he said. Another interest he has is in Movement and Sports Science.

“I really think I will be going into English though,” he said and described his future aspiration to write for magazines as a music critic. “I want to write for the Source, it’s a hip-hop magazine.”

Sharing a fascination for music, in its many forms, including rap, jazz, hip-hop and some alternative and gospel. Thomas said that he is able to tell what songs will be popular.

“I listen to music all the time. Some of my teachers have told me, ‘I’ve never seen you without your earphones on,’ ” he said. “In fact, I have them in my pocket right now.”

When carrying a conversation with Thomas, one should be able to recognize the relationship he has with his mother.

He said that as an only child, he believes that what they share is special. “We have a really weird relationship,” he said. “We’re best friends, who do not have to talk to each other or who don’t really bother talking to each other sometimes.”

Since his mother lives in San Diego, he said he does not expect her to attend all of his track meets.

“It is nice to have her there so she can see me running and stuff,” he said, “but, it is not like a big necessity for me.” He said his mother has attended three of his matches this year, and she plans to fly out to Illinois to watch her son run in Nationals, which takes place on May 24-25.

His mother is also one of his role models.

“She has gone through a lot in her life,” he said. “I admire the strength that she has shown to get this far.”

His other role model is his godfather.

“Before I met him, I considered myself a normal person, who liked to get eight hours of sleep. The more I hung out with him; I slept less and less because I got more involved with things. He is the type of guy who will literally stay up 48 hours and play a game of basketball with you before he goes to work. He’s just a busy person, who just takes it all in. I see that in myself now.”

Thomas said that his proudest moment performing at ULV thus far was the meet against Claremont.

“It was our last SCIAC meet of the season into a conference and it was just before spring break. A lot of people do not know that Claremont has been winning SCIAC for the last nine years, and La Verne [men’s track] had never placed in SCIAC. We beat them, and they were not expecting that. To be a part of that is just the greatest thing,” he said.

Widolff said that it is Thomas’ ability to be a silent leader that carries more authority within the team.

“He doesn’t talk a whole lot,” he said. “He just kind of leads by working out. The workouts led to being great in the races and then when he is great in the races, the kids respect him a lot and look up to him as sort of a leader because of his performances.”