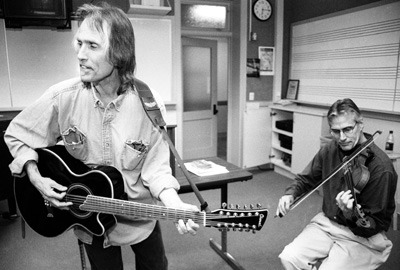 Familiar tunes filled the air on Monday when John York, former member of the The Byrds, sang and discussed issues from the ’60s with David Brock’s American Music class.

In addition to performing with the international folk-rock group the Byrds, York has worked with groups such the Mamas and the Papas, Sir Douglas Quintet, Johnny Rivers, the Flying Burrito Brothers, Lightnin’ Hopkins and Dr. John.

“The nice thing about John coming in and talking about the music of the ’60s and ’70s is that he knows something about it,” Brock said to his class.

Fliers around the University of La Verne campus advertised that all students, faculty and staff were invited to attend, however nine members of Brock’s class were the only guests. The small gathering did not deter York from sharing his experiences and thoughts about the ’60s with the students. One aspect he discussed was the kind of music that came from that time period.

“The only way to get a reference on any period of music is you have to kind of look at what came before it,” York said. “When you think about it, the ’60s were kind of a reaction to Elvis. You had a guy who didn’t write, he interpreted other people’s songs, he never really had any control over the band. One of the things that happened in the ’60s was rejecting that Elvis kind of thing.”

When asked by a student whether he believed that drug use affected the creativity of musicians or social movements as a whole, York responded, “So many of my friends from that time period are dead. I mean, you look at my resumé and it’s like reading an obituary.”

“So many [people] that I worked with that got into that whole drug thing, even after they would clean up, after they would wake up, they had hurt their bodies so much and their minds so much, they were so weakened that they would die,” he said.

In the course of his discussions with the class, York played a 12-string guitar and sang one of the most familiar songs from the Byrds, “Turn, Turn, Turn.” He also had with him an assortment of international instruments that he played for the group.

“It was kind of neat to see him [singing live] instead of hearing something that had been recorded over and over,” said freshman Brandon Laird, a student in Brock’s class.

York referenced the time that he spent living in a commune with a friend and said that it was a time that people sought alternative solutions to everyday things such as buying groceries. “Instead of buying things, we would trade things,” he said. York said that he felt living in a commune was a good idea for someone who wanted to retreat and deal with who they really are. However, he does not think that it is the perfect solution.

“What I learned [from living in a commune] is that you can’t just drop out [of society]. How can you not be a human being? We’re all in this thing together,” he said. “Or how can you possibly say ‘so, I’ll have nothing to do with it?’ You can’t do that or otherwise you’re part of the problem.”

So what does York think about the current music that is being produced?

“I feel like it’s a very creative time right now. People are starting to take a stance with their music,” he said. “Not all of it is deep, but a lot of it is. People are telling the truth about where they’re coming from, and a lot of people don’t want to hear that.”