By Campus Times Editorial Board, Natalie Fowle on September 21, 2001 in Editorials, Opinions 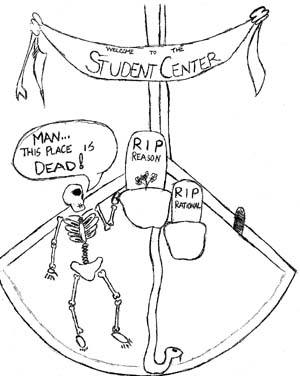 Student Center. When thought of, images of students hanging out, having fun and playing games come to mind.

Now think about ULV’s Student Center. If you’ve been in the Student Center recently, most likely the images that pop up are silence, non-populated and even boring.

This begs the question of why our student center, the place that is supposed to be a haven for having fun and kicking back, is as dull as it is? Compared to other schools in the area (Mt. SAC, Cal Poly, the Claremont Colleges), our Student Center is duller and quieter than the library. Students could (and probably do) go to the Student Center instead of the library to study and read. The only thing missing are the books.

It can be argued that ULV does not have enough students to hang out anywhere on campus, but there is no real defined place that people come together and just chill. The biggest gathering is usually lunch and dinner at Davenport, and it’s just because that’s the only place students can get food nearby. There is always the option of going to The Spot, which is in the Student Center.

Of course, the simple fact of the matter is most students only go into the Student Center now either to check their mail, watch sporting events in the gym or have a quick meal at The Spot.

Something that could change this situation would be to add more activities planned in or around the “dead zone.” Replacing the old, ratty pool and ping pong tables with different games (an arcade, perhaps?) or even with newer, nicer ones might do the trick and attract more students.

Other options may include extending building hours, or remodeling the ’70s-looking tent. The outside design is interesting and is a definite landmark for ULV, but the inside is out-dated.

If the Center were to get a newer look, it might tempt students to hang out there. It’s pretty disappointing to see such a unique building, enter it, then end up being unimpressed.

One more option could be to turn one of the now vacant communications rooms into a commuter lounge. This could be the boost the Commuter Advisory Board (which is now up in the air because of Michael Houdyshell’s departure) is looking for.

Despite all of these negative observations, there is one thing that just last week did help the dreary Student Center; the Club Fair.