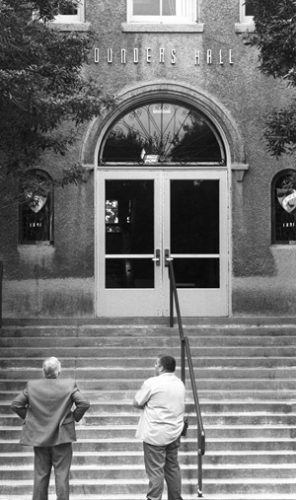 La Verne Police had no suspects Wednesday after a Monday morning bomb threat on campus forced the evacuation of two buildings and the cancellation of dozens of classes.

At 10:50 a.m. the University of La Verne Campus Safety Department received a call stating that bombs had been planted in Founders Hall and the Mainiero Building, according to a Campus Safety officer.

Classes in those buildings were promptly dismissed and the buildings were evacuated at approximately 11 a.m. so that police, campus safety officers and members of the operations department could conduct a thorough search, the officer said. No bombs were discovered in the search.

The call was later traced to a pay phone in front of the Circle K convenience store on D Street in downtown La Verne.

“There are no leads at this point,” said John Lentz, director of campus safety and transportation.

“It scared me,” Velasquez said. “She said that if I don’t take her seriously, we’d see what happens.”

“Well most likely it was a prank,” said LVPD Captain Ken Swank. “Pranks like this happen at schools all the time and we didn’t find anything suspicious.”

On Monday, students, faculty and staff stood around outside Founders while police, security officers and members of the ULV Operations Department scoured the building.

Throughout the ordeal, members of the campus operations department guarded the buildings, standing in front of them.

George Martinez, who works for the campus operations department, said that the top floors of both buildings were deemed safe by approximately 11:35 a.m.

At 11:40 a.m., Lentz motioned for everyone to re-enter, “Everything is clear. The building is clear,” he said.

“The main thing was to get everyone out, so we can check the building room by room and keep people out of the building,” Martinez said.

ULV Webmaster Jason Smith was asked by security to identify a suspicious object in his office on the bottom floor of Founders Hall.

“I have weird boxes in my office and they wanted me to identify them,” said Smith

“There’s always concern for the safety of the faculty, staff and students and we have to take these things seriously,” said ULV President Stephen Morgan who was off campus at the time of the threat and was informed of the event via telephone.

“These types of events are disruptive to the community” Morgan said. “Things like this happen from time to time, but not frequently. The last one was a few years ago, at least. But I think we handled it well, we do a better job now at clearing buildings rapidly.”

“I think the reasons behind acts like this, prank calls, is because there are people who get a psychological relief by inconveniencing 200 peoples’ lives for a period of time. I believe it was just a prank,” said Lentz.

He went on to say “Our students here just don’t do things like this. It’s disruptive and calls for a lot of work load. I hope this is the one and only one we get.”

Lentz added this is the first bomb threat he has had to handle in the five years he has been at ULV.

Some on the scene were visibly shaken.

“I am concerned, I think anybody would be,” said Steve Biondo, music department assistant who was among those who were evacuated from Founder’s Hall.

“Why would anyone want to bomb the University of La Verne? It doesn’t make any sense,” said senior Nikkia Williams.