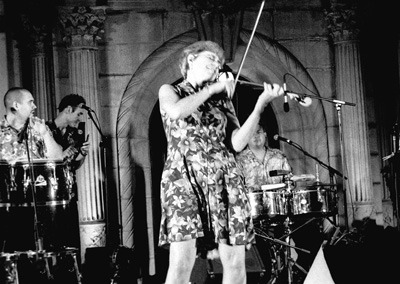 The Susie Hansen Band entertained a diverse crowd Oct. 12. Fausto Cuevas on conga drums, Nelson Amador on percussion, Susie Hansen on violin, Tiki Pasillas on drums, Rene Camacho on bass and Joe Rotondi on keyboards (not pictured) have been playing Latin jazz music together for 12 years. The 4th Annual Claremont Depot Jazz Series, sponsored by Metrolink and the city of Claremont, ends tonight. The free concert begins at 6 p.m. at the train depot at 200 W. First Street in Claremont. / photo by Lauren Wooding

The sounds of Afro-Cuban Latin jazz echoed through the heart of Claremont last Friday.

People of all ages showed up for an evening on the lawn in front of the beautiful backdrop of the Claremont Depot to take part in the Fourth Annual Claremont Depot Jazz Series.

The Susie Hansen Band presented an evening of Latin and Afro-Cuban beats and rhythms all in the name of jazz.

The band kept the crowd moving with its upbeat tempos and hip shaking rhythms.

Opening the set with “This Old Flag,” the band set a mood that would slowly take the crowd through a series of American songs with a salsa twist. As part of the set the band performed a Mambo version of Duke Ellington’s “Take the A Train.”

At one point, Hansen explained a form of Afro-Cuban song and dance called Danzon. According to Hansen, it is a predecessor of salsa and the “cha cha cha.”

“Imagine you are not in Claremont but in Havana, Cuba, at the turn of the century,” Hansen told the crowd.

She described the music of Danzon to be divided into three parts. The first part is for dancing, the second part is break time for the women to walk around and fan themselves, and the third part is to dance again.

During the Danzon, Hansen beckoned the crowd to the dance floor.

Judy Massey of Grand Terrace swept the dance floor with her “sweetheart.”

“This is the only one (in the concert series) I’ve been to but so far this is wonderful. Perfect weather, great music, fun to dance to, we’re all having a great time. We get email from Susie Hansen,” said Massey.

After a 15-minute break, Hansen led the crowd in a Merengue lesson.

“Merengue is the easiest of the Latin dances to learn because you are just marching in place,” she said.

While many participated, some preferred to sit back, relax and enjoy the music from afar.

“We always come to the Friday concerts as a habit. It’s relaxing,” said Ed Powlesson of Claremont. “Tonight is really loud, I like the music, but I thought it was going to be softer But other than that, it’s been nice.”

After the show, Hansen was available to speak with fans about the event and the series.

She explained why she chose the Afro-Cuban Latin music.

“It’s the most rhythmic and most heartfelt,” she said.

This concert was part of a concert series put on by the Claremont Human Services department and sponsored by Metrolink.

“The theme for this year’s series is the ‘best of,'” said Nancy Matthews, deputy director for Human Services. “It’s diverse types of jazz, from swing, jump blues, Latin jazz.

The last show will be mainstream jazz.”

She added that many jazz enthusiasts believe this series is among the best jazz in the Los Angeles area.

The next and last show in this year’s series is 6 p.m. tonight in front of the Metrolink station on First Street in Claremont. Performing is swing-jazz influenced Nairobi Trio.

Festival marks end of Latino month
Letters to the Editor