By Campus Times Editorial Board, Natalie Fowle on October 19, 2001 in Editorials, Opinions 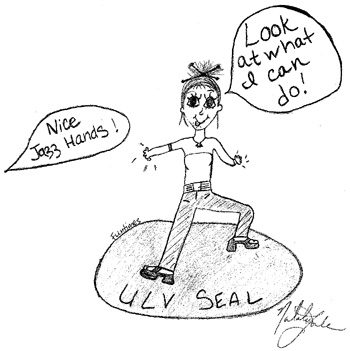 You are making your way down the University of La Verne quad, when you find yourself heading straight for the seal. You ask yourself – To walk, or not to walk. This is a scenario that ULV students face daily. We are told not to walk on the seal and some of us oblige out of respect. Some of us oblige without giving it a second thought. But why aren’t we supposed to walk on this ‘sacred,’ ‘holy,’ ‘magical’ seal? How did this “don’t walk on the seal” rule get ingrained into everyone’s mind? Do we really honor the seal? Or do we just follow directions well? The seal was introduced to the campus in 1989. There are no official rules about the seal. But when students begin school they are told that walking on the seal is prohibited. It’s ‘tradition.’ But what is the purpose of this tradition? The fact that so little is known about the seal indicates its unimportance. Granted, for some people the seal stands for tradition and ULV’s mission statement. But for a majority of the students the seal means little or nothing. We do not take pride in it. Why should we when half the time the seal is not even protected and nobody discusses it. Some people do not walk on it because they think they shouldn’t. Maybe they feel a little guilt, but its not their fault if they do not feel an affinity to it. You can not place meaning upon an object, or force a tradition.

The seal is illogical in its purpose. If you do not want someone to walk on it, do not put it on the ground. To top it all off — the seal is in a highly-trafficked area on campus. Frankly, it is in the way.

This is just a prediction but, looking back on our college experiences, it is doubtful that we will get a warm, fuzzy feeling when thinking of the seal, and come to think of it, the seal has very little impact on our daily lives either.