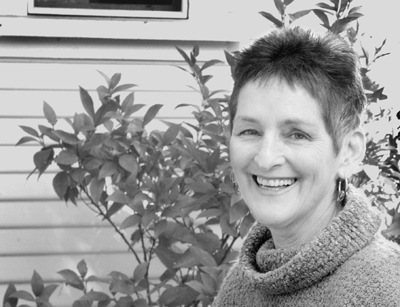 Jane Dibbell, 63, former University of La Verne theater professor, spends her days working on her book “Stepping in and Stepping Out: Conscious Emotions for the Actor.” Dibbell was diagnosed with stage-four breast cancer in 1998. She left the University in 1999 and has done remarkably well since then , thanks to the support of friends and alternative therapies. / photo by Jason Cooper

The poster that hangs inside her office signifies what was supposed to be her goodbye to the University of La Verne.

From the photograph which was taken in the Fall 1999, Dibbell appeared to be a woman who is carefree and untroubled — long brown hair flowing over her shoulders and a smile radiating a sense of peace and serenity.

Behind the picture, however, Dibbell and those close to her were facing a real life challenge that acutely paralleled the character she was about to play.

In “Wit,” the role of Vivian Bearing Ph.D., recounts the final months of one woman’s losing battle with cancer. It suited Dibbell because she was also dying of cancer. She, like Bearing, had begun to reassess her life and her work with depth and humor once she was diagnosed with the disease.

And with this performance, Dibbell was taking part in what was to be the final stage piece of her theatrical career and her life.

“I absolutely believed that it was to be my last,” Dibbell, 63, said in a recent interview. “It was so wonderful to do because I knew everything the woman was going through.”

October 1998, one year before this final production, was when her own battle began. Dibbell was directing Shakespeare’s “As You Like It” when she got the call from her oncologist informing her that there had been a spread of cancer throughout her body. She had stage-four breast cancer, which meant it had spread to her spine and lungs and that it was terminal.

At that time her oncologist offered her no hope for cure or remission; with medication, he told her, she could buy some time.

“I did chemotherapy for eight months, and at the end of those eight months, I was dying from the chemo, not the cancer,” she said. “It had attacked my heart, and I was in congenital heart failure.”

No one expected her to continue living, including herself. So Dibbell’s children moved back home to take care of her, along with the supervision of hospice nurses.

“I was on oxygen 24 hours a day, and there is a fight that comes with the process of letting go,” she said. “One of the things that I noticed is that when I saw other people in the very last moments of dying, the families were so upset and worried about them.”

With her health declining, her energy evaporating, the cancer growing to every cell of her body, Dibbell and those around her realized that her time was limited. However, she never allowed pain and desperation to overwhelm her mentality.

“What happens with consciousness at that point is that you are not holding onto that pain, even if it looks painful, it doesn’t register that way. I was aware this was happening to me, that I wasn’t registering the kind of pain people thought I was in,” she said.

Following her diagnosis, she continued to teach through January 1999. But by February of that year, the cancer and its harsh treatment had depleted her energy so that she could no longer continue. Since then she has been on an “indefinite” leave of absence.

Since that time, Dibbell has done remarkably well, surpassing doctors’ and even her own expectation for her survival. Though she is still not healthy, she credits a variety of alternative treatments and support structures for the health and clarity she has today.

“The cancer doesn’t go away, the cancer is spreading slowly. How slowly and how quickly, I have no way of knowing, nor do the doctors,” she said.

Dibbell began to seek out alternative forms of healing after a friend informed her of natural healing processes. She also accepted love from everyone she came into contact with, she said.

Retreating in the face of cancer or allowing the fear of this disease to dictate her everyday actions was not how Dibbell chose to live her life, she said. And it was through this openness that Dibbell returned to a more-or-less active life.

“There is no explanation for it. I was dismissed from hospice and I have received all kinds of gifts of love, and I think a lot of that sustains a person,” she said. “I welcomed every form of loving. If people wanted to bake cookies for me, I would accept them. I didn’t seek it out and I didn’t go looking for it, but many people came my way who were generous and loving. That affected my energy a lot.”

Today, as Dibbell continues to appreciate what life presented her, she spends her personal time enjoying every moment of each day. She has a new five-month-old granddaughter, and she has begun to write a book with her friend, ULV visiting Theater professor Steven Kent. The two plan to have the book published sometime next year.

“We both approach theater with such common philosophies. We are the same bird,” Kent said. “It is mutually stimulating, and we both found a fellow traveler in the other.”

“(The book) is something that I have been wanting to do for many years but haven’t been able to have the time,” Dibbell said.

Dibbell’s book, “Stepping in and Stepping Out: Conscious Emotions for the Actor”, deals with various emotions that actors encounter in the process of becoming a character. The book deals with the double meaning of conscious acting: teaching actors how to be conscious on the stage, and assisting them in making conscious choices within the discipline of the art form.

“I know the dialogue will be interesting. I want to see this book, and I want to use this book in my work,” Kent said.

Dibbell developed her understanding of the topic developed after encountering numerous students who could not recognize their place on the stage.

Her intentions with writing the book are to pass on information she has gathered from those around her and those things that she acquired along the way.

With this creative process, Dibbell has been able to take her mind off things that have burdened her in the past, but the health issues are still very present. She can accomplish only one major activity a day, whether it be going to the grocery store or visiting a friend for lunch. Dibbell cannot over-exert herself because her body will not allow itself to.

“With all the complexities of writing a book and the difficulties of the medication I am on, I am not able to keep a thought in my head, and I start falling asleep as soon as I get to the computer,” she said.

It takes all her energy just to stay mentally focused. She said she uses forms of dance and exercise to get oxygen into her body and her brain.

She also received Reiki treatment, an Eastern practice which she explained involves accessing unseen energy that flows through all living things and is connected directly to the quality of the health of an individual.

Accessing this “life force energy,” Dibbell believes, has prolonged her life and slowed the cancer’s progression, but it has not entirely healed her of the pain.

“I am on medication for pain, and one of the things I have tried to do in the last couple of months was to get off any of the pain medicine.

“But it was horrendous; and the pain is still there. It keeps adding up, and I am surprised I am still alive because the kind of havoc those medicines can take on your insight, let alone your mind,” she said.

With all her looking inward during the past three years, Dibbell believes that without the support from the ULV community, she probably would not have made it this far.

This support, she said, has motivated her spirit and allowed her to continue with her life’s projects despite being sick, she said.

“I have been graciously supported by the university, especially President Morgan and David Flaten. There has been a kindness and generosity above and beyond what people usually find in their job.

“People don’t support them once they have gotten sick. I have been supported through my colleagues who come by, and who are always asking about me,” she said.

A deeper understanding of what she has encountered is what Dibbell believes to have been her greatest accomplishment during this trying time.

“Jane’s struggle, perspective and consciousness is so moving to me that I see it as a life example,” Kent said. “She’s extraordinarily brave and generous, and she approaches these difficult periods with such depth that she is an example to everyone,” he said.

She has found a new connection with her own personal spirituality and with the divine, and she has been able to gather a new perspective on everything she has accomplished.

“What I have been able to reflect on and to learn in this time was that my connection to the divine is through friendship,” Dibbell said. “I used to think that God was ‘up there,’ and then I went through a period where I didn’t think God was anywhere.

“I was terrified; I didn’t know what God was. But now I know that the present moment is forever — that is what infinity is, and I expect that to go on forever,” she said.

She cannot provide all of the answers to the questions about her life and her cancer, nor does she want to solve that mystery.

Dibbell just knows that with each day, she will appreciate what life has given her.

“I can only say that I don’t know why I am still alive four years later,” she said.

“What I thought was going to be a scary process has turned out to be not scary at all, and with each day I feel more at ease. I have grown spiritually in this time, so I am grateful for that.”