By Campus Times Editorial Board, Natalie Fowle on November 9, 2001 in Editorials, Opinions 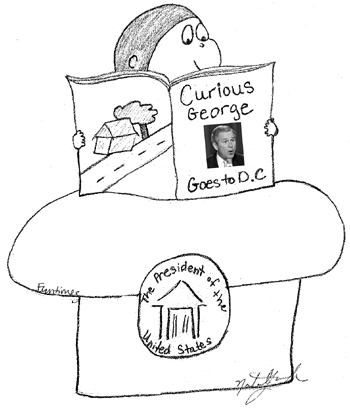 When publicly elected officials have the power to work in secrecy, what have we, the public, lost? When a right to gain access to information that should be deemed “public” is denied, where do we turn to in order to learn from our mistakes? When the Fourth Estate loses its ability to serve as a watchdog and a voice for the voiceless, who can we expect to protect us and keep the government in check? And when our historians, archivists and teachers of today and tomorrow are being kept in the dark, who can we count on to teach our children?

On Nov. 1, President George W. Bush signed an executive order to allow either the White House or former presidents to prevent the release of their presidential papers. This act will essentially grant presidents the liberty of being able to act without fear of being held accountable to future generations for their actions. This act will ultimately silence the media, charged with disseminating information to the public.

However, Bush’s executive order will essentially undo the Presidential Records Act of 1978 and allow the truth to remain buried.

Bush’s decision to sign the executive order that will overturn the Presidential Records Act of 1978 came after a request for former President Ronald Reagan’s papers was made.

President Reagan’s own vice president was none other than daddy dearest, George Bush senior. Coincidence? No. Convenient? Yes.

The elder President Bush, infamous for his affiliation with the CIA and his part in the disgraceful Iran Contra arm deal, will be among the first to benefit from this new executive order. What a very merry Christmas the Bush family will be having after all.

Being the public servants that they are, expectations for the president should be to simply “serve the public that has elected you.” Rather, what seems to be the new trend is to “Deceive and dupe the public.”

In what may seem to be a mere attempt to save his father’s face, President Bush has now set a precedent that will slowly, yet effectively, rob power from the Fourth Estate and ultimately render the media and the public helpless against the reign of presidents to come.

A metaphoric cop with no badge it seems to be. Presidents from here on out will have no one to answer to, assuming that they have left behind a dynasty for their sons and daughters to play “house” in, or more appropriately, play “White House” in.

Disband Congress and raise the monarchy. With no governing authority over the president, the entire system of checks and balances may as well be thrown out. It is essential that information be allowed to filter its way down from publicly elected officials, through the media, and finally to the public. This systematic approach to informing the general populous has, and should always be, the imperative relationship between those who govern and those who are governed. In turn it limits any one president from seizing too much power from the people.

Presidents seek election by courting the public, asking them for their votes. They campaign, state to state, in hopes of appealing to the average man and woman.

What they ask for is our support. What they receive is our votes. They come to us, the public, asking to be trusted with the responsibility of representing our great nation, asking to be bestowed with such a great honor.

It is these people, these presidents, who come to us, and in return we trust them to govern this nation, founded on democracy, in a manner that strengthens this country, not one that deceives it.

The Red Scare? Not a problem, we have manufactured post-McCarthyism. Corrupt publicly elected officials? Who cares?

At such a critical point in the evolution of our society, we as a Nation cannot afford to make the mistake of granting the president the power of a monarchy, nor should we sit back and allow presidents, past, present and future, to be able to work behind closed doors.