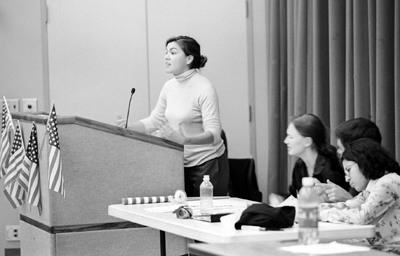 Senior Melissa Galaviz, a member of the debate team, speaks on the side of the opposition during last Thursday’s debate on the topic “Should America shut up and listen.” The two sides were lead by Jason Neidleman, assistant professor of political science, on the side of the government and Stephen Sayles, professor of history, on the opposition. The debate was sponsored by the Lordsburg Debate Union. / photo by Juan Garcia

The debate, “Should America shut up and listen?” was opened by speeches given by Professor of History, Stephen Sayles and Jason Neidleman, assistant professor of political science. Afterwards, members of the club debated the motion, La Verne’s parliamentary style with three students speaking on each side.

“We talked about it at our meeting and we all agreed that we wanted to promote a discussion about America’s reaction to the terrorism on 9-11,” said junior Jessica Lord, president of LDU. “We wanted the motion’s wording to provoke a strong reaction from everyone,” said Lord.

The audience of about 60 people was allowed to give floor speeches at the end of the debate and heckle all of the speakers, traditional occurrences at public debates.

According to Lord, the purpose of these types of public debates is to promote a lively conversation.

“We want to create an environment where it is okay to express any opinion,” Lord said. “So we force our members to defend the unpopular side as well as the popular side. Most of the people who debated were supporting the side that they didn’t really believe.”

“It’s also a great atmosphere for the teachers to have a discourse and then share it with a community and a group of students,” said junior Andrew Kim.

LDU hopes to have every ULV student attend at least one debate and to have different faculty members speak at each.

“We are lucky at ULV because we have a wealth of experienced, qualified faculty to draw from for our events. I hope that every teacher gets the opportunity to speak at an event,” said Lord.

In future events, Lord said she also hopes that teachers will be comfortable with expressing an unpopular or controversial opinion that they may not necessarily agree with in order to get a lively discussion going.

Neidleman was the first to address the audience.

“Dr. Sayles and I were a little bit apprehensive about accepting the invitation,” he said.

“Professors don’t debate, we don’t fight with each other. We don’t take a side for the sake of taking a side,” he said in an interview after the debate.

He also said that while in class, a teacher should keep his opinions to himself, so that the students gain a chance to develop their own ideas and opinions.

Neidleman, however, welcomed the invitation to speak at the debate because, “We’re (professors) always anxious to have a captive audience who’ll listen to our views on a controversial subject,” he said.

Neidleman talked about the Sept. 11 attacks and then recommended studying the roots and conditions that created the terrorism and understanding “our own role in leading to terrorism and looking at terrorism in a larger context.”

Neidleman added that U.S. foreign policy should be analyzed and called into question. He used the example of U.S. support for the government in Saudi Arabia, which is oppressive.

Sayles then addressed the audience on the motion, recommending that people take into account the history of America and how in times of war the government sometimes ends up curtailing civil liberties. He said that Sept. 11 would be remembered as the “benchmark and birthplace of the 21st century,” much like the assassination of Archduke Franz Ferdinand, the heir to the throne of the Austro-Hungarian Empire in 1914, which directly lead to World War I.

In regard to the motion, Sayles said “We should not shut up, rather we should talk more.” He also recommended that America not isolate itself, but rather engage its opponents.”

The U.S. remains a catalyst for peace in Ireland, the Middle East (in regards to Israel) and the Balkans,” he said.

After Sayles’s speech, Jessica Lord opened the student debate, announcing her team’s plan to increase foreign aid in order to prevent war. The teams’ main arguments were that building up infrastructure and providing education in underdeveloped countries would increase that nation’s stability and in turn prevent future conflicts.

Nathan Baca, who also spoke in favor of the resolution talked about eliminating debt owed by Third World countries.

The opposition argued that giving money to other countries is not the answer and doing so would surely create a backlash against America.

Junior Jennifer Contreras, who spoke in favor of the resolution, said that the terrorism of Sept. 11 might have been prevented and that increased military spending is not the answer.

Junior Andrew Kim ended the opposition side of the debate stating that increasing foreign aid would be much like rewarding something that should essentially be punished.

Senior Melissa Galaviz and junior Kim Reed were the other opposition team members in the student debate.

Freshman Travis Raymond gave a floor speech in which he told the audience that the truth lies somewhere in the middle.

Senior Stephanie Adams also gave a floor speech reminding the audience of the current humanitarian crisis in Afghanistan: “More Afghans will end up dying than Americans. These are innocent people,” she said. “We’re perpetuating an eye-for-an-eye situation.”

The humanitarian situation is indeed dire, which according to UN commissioner for human rights Mary Robinson, up to three million Afghan citizens have fled their homes.

Another seven million people are at risk of starvation due to the approaching winter.

To end the debate, audience members were encouraged to express their ‘vote’ on the topic by walking through one of La Fetra’s two doors, each labeled as ‘yay’ and as ‘nay’. In this debate, the ‘nay’ side won the majority of votes.

“I think public debates like this are really good for bringing the community together,” said sophomore Elissa Salas.” I am really proud of LDU.”

The next public debate will discuss racial profiling. LDU plans to work in conjunction with the Latino Student Forum to organize this debate. A time and date has yet to be announced.

LDU meets every Thursday at Nick’s Place in downtown La Verne at 7 p.m.

The meetings are open to the public.