By Jennifer Contreras, Tim Tevault on November 16, 2001 in LV Life 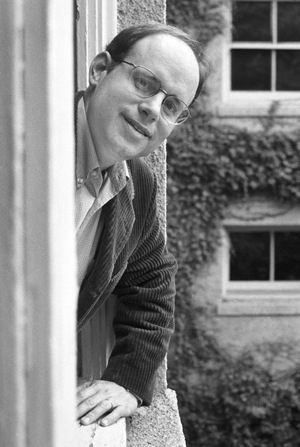 Using books like the “Journal of the American Musicological Society,” Kenneth Marcus, assistant professor of history, uses his expertise in music to conduct his history classes. Marcus majored in history as an undergraduate student at UC Berkeley, but he took private studies in music and uses the piano and guitar in his classes to link history and music. / photo by Jennifer Contreras

The fusion of music and history has not coexisted this well on the University of La Verne campus. That was until Kenneth Marcus arrived.

In his first semester at ULV, the history professor says he has a motivating, innovative way to get students to learn history, along with music’s important throughout history.

Marcus has written some of his own songs to stress the importance of music.

“At my previous institution, I taught U.S. history and I had a CD to accompany the course,” Marcus said.

He performs in class, playing a guitar, piano, or just singing for his students.

Marcus’ path to ULV was an interesting one, full of world travel to Europe.

He was born in New York, and his family moved to the Midwestern town of Urbana, Ill., two years later, where he spent most of his youth.

“In retrospect, it was a great place to grow up,” Marcus said, adding that Urbana was a “nice, pleasant, quiet, boring community.”

When he was 17, Marcus and his family moved west again to California.

“I felt at home as soon as I came,” he said. “I always wanted to live in California, which is a very common Midwestern thing.”

Marcus attended University of California, Berkeley, where he earned his bachelor’s degree in history.

From there, he moved on to Paris for two years, where he received his master of arts in European history.

He remained in Europe and studied at Cambridge University for four years.

It was in Cambridge where he met his future wife, a native of Switzerland.

Despite the distance between them, the couple was able to maintain their relationship.

“It was true love. We managed to keep it (the relationship) up with her being in Switzerland and me being in England,” he said. “For a while, I was in the states and she was in Switzerland, that was tough.”

After completing a year of archival research in Germany and Switzerland, Marcus completed his dissertation on the state in early-modern Germany.

While living in all of these countries, he learned to speak German and French.

He also speaks a “Swiss dialect” which he learned from his wife.

He then moved from England to Boston, Mass.

“I basically went from one Cambridge to another,” he joked.

While in Boston, Marcus taught at Boston College, which he says had a “terrific student environment.”

He spent a brief stint there and at Harvard as a tutor.

He then moved back to California to teach at Cal Poly Pomona in 1994.

He taught there until arriving at ULV in September of this year.

“I really enjoy it here, it’s very nice,” he said, “I like the idea of teaching at a small institution, getting to know students and faculty and staff better.”

“You can do a lot of things in a small institution that you can’t do at a big institution,” he said.

This semester Marcus teaches courses in the French Revolution and the Napoleonic Era, Historiography and World Civilizations.

“I’m impressed with some of the work students hand in,” he said.

In addition to a Modern European History course, next semester Marcus plans on expanding his love for music and history by co-teaching with an instructor from the music department a new course, Music in History.

“(The course) will look at major currents in European social thought and intellectual life and music from the 16th to 20th centuries and how music was an integral part of that social life,” Marcus said.

For now, though, Marcus has a bigger task on his hands-raising a newborn baby.