By Christine Owen, Tom Galaraga on November 30, 2001 in Sports, Volleyball 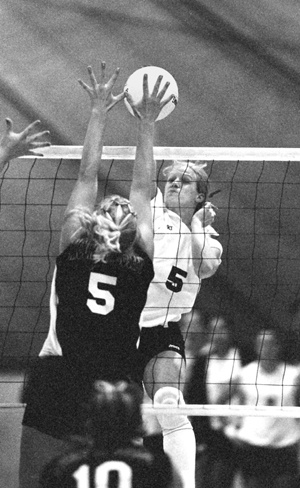 Sophomore outside hitter Amy Smith goes up for the kill against Mt. Saint Joesphs’ defensive blockers. Smith contributed with 10 kills for the game, in the Leopards three game sweep. The Leopards played in front of a full capacity crowd, easily dismissing their quarterfinal opponent. The women play today against Juniata College at 5 p.m. / photo by Tom Galaraga

by Christine Owen
Editor in Chief

In its first trip to the NCAA Final Four since 1985, the University of La Verne’s women’s volleyball team will compete at 5 p.m. today against Juniata College (Pa.) in a semifinal match.

Hosting this year’s competition is the University of Wisconsin Whitewater.

The Warhawks are the Midwest Regional Champs and will face Wellesley College (MA) (New England Regional Champs) at 7:30 p.m. today in the other semifinal match.

Tomorrow, the third place match will be played at 5 p.m. and the championship will take place at 7:30 p.m.

“If we play our game [against Juniata] and don’t let anything affect us, we’re a pretty tough team to beat,” said senior setter Ryan Winn.

After wrapping up the first two games against MSJ, La Verne led 8-6 in game three until the Lions rebounded and scored six unanswered points to move ahead 12-8.

They led until La Verne scored six out of seven points in a row to take the lead, 23-22.

A kill from outside hitter Betsy Owens tied the game 23-23, and consecutive kills by MSJ moved them ahead 25-23.

The teams traded kills for points until the score was tied at 28-28.

Freshman Amy Kratochvil registered one of her 18 kills for the night and moved the Leopards within one point of a victory, but MSJ’s Ginny Thomas tied it again with a kill.

MSJ served it up and defensive specialist Adrian Pearson smacked down her only kill of the night as ULV fans jumped to their feet for match point. The Lions returned a ULV serve and Amy Smith registered the match-winning kill.

“We played awesome, everyone stepped it up and pulled through,” Kratochvil said. “We were kind of down that (third) game but we caught up and won.”

Winn had a match high 40 assists.

ULV head coach Don Flora said that blocking practice before the match really played a part in the win over MSJ.

“We tripled them up and had three times as many blocks as they did and that was a big goal of ours,” Flora said.

In regard to facing Juniata, Flora said, “I think we need to be a little bit better on our ball control, serve receive, our blocking and just a little more offensive rhythm.”

Juniata (29-8) earned its spot in the Final Four by emerging as the Mid-Atlantic Regional champs.

In the quarterfinal round, Juniata defeated Trinity (Tex.) in four games. This will be Juniata’s 17th trip to the Final Four, and they hold 21 consecutive conference titles.

The Leopards are back-to-back conference title champions, with a season’s record of 25-1. The Leopards only loss was a forfeit against Cal Lutheran.

Adding to the Eagles attack was Brandy Workinger with an average of 3.83 kills and 3.87 digs per game.

Winn and junior Stacey Lupu were recently named to the 2001 All- America team for Division III by the American Volleyball Coaches Association.

Winn was named to the first-team and Lupu to the second-team. Winn also was named SCIAC player of the Year and to the All-West Region team.

Lupu was also named to the All-West Region team.