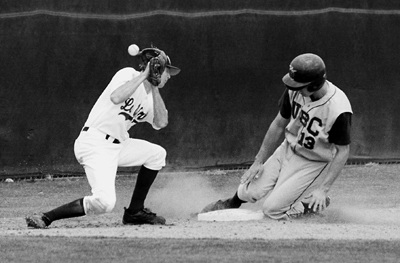 University of La Verne sophomore John Doak attempts to shield himself from a ball that has taken a bad bounce as University of British Columbia’s Cam McLeod steals third base. McLeod never crossed home plate, and the Leopards held on for a 9-4 victory in game one of a doubleheader played on Monday. / photo by Liz Lucsko

It was a showcase of talent Wednesday night when the University of La Verne’s baseball team defeated Chapman University, the No. 2 team in the nation for Division III.

Sophomore Justin Van Duyne started on the mound for the Leopards, but could not produce, after letting two runs score in the bottom of the first.

Van Duyne held on until the third inning after a one-run homerun from Panthers Brian Sanders to put the Panthers on top 2-3.

Sarrail’s slow strut to the mound showed the sophomore’s focus, which was the deciding factor in the game.

“Al was calm and he threw all his pitches well. He kept hitters off balance all night,” said senior catcher A.J. Garbick.

When asked what decided the game for the Leopards, coach Winterburn simply said “Alan Sarrail.”

Sarrail held the Panthers scoreless through the game.

Sarrail pitched seven innings with 1 walk, 8 strikeouts and no hits. Sarrail retired the last 15 batters in the game consecutively.

“He threw strikes and got ahead of hitters,” said senior Nick Lemas.

It was Andrew Tisdale who started for the Panthers.

Tisdale, who pitched fourteen games for the Panthers last season, was selected 1st Team ABCA/Rawlings All-American. Tisdale was shut down by the Leopards offense. Leaving Tisdale with a no decision.

“We had timely at-bats,” said Winterburn. “It was a team effort.”

It was in the sixth inning that the Leopards took control of the ball game.

Sophomore John Doak led off with a walk and was advanced to third off of a single to right center from sophomore Joe Scott. After another walk and a fielders choice, up came Lemas.

Lemas stepped it up at the plate and hit a single into center field scoring two runs, putting the Leopards ahead by one.

“I got a verbal cue that a curve ball was coming, so I sat on it and hit it up the middle,” Lemas said.

It wasn’t until the ninth inning that the Leopards would score again.

Having held the Panthers offensively it was time for the Leopards offense to put insurance runs on the board. Lemas led off the inning and was hit by a pitch.

Lemas’ heads up base running advanced him to third on a failed pick-off attempt. A double from sophomore Peter Hanson and a single from Ray Podesta scored two runs putting the Leopards ahead by three.

And ahead by three they would stay defeating the No. 2 team in the nation and making a big statement in Division III baseball.

“Once we got ahead I knew we would win,” Lemas said.

A big performance from senior first baseman Steve Smith, who had 5 digs at first base, made him an offensive standout.

“The things that we do in our program came to life last night,” said Winterburn.

“We stayed calm and executed our plays all night long, that was the main factor in our offense,” Garbick said.

Monday the Leopards took on competition at home behind starting pitcher Van Duyne. Although he was sharp on the mound, it was the Leopard’s’ bats that earned them the 9-4 victory over the University of British Colombia.

La Verne attacked early against UBC, scoring in the first inning off of a James Ortega double. The offense was just getting started though.

The Leopard’s posted six more runs before the Thunderbirds got on the board, four of which came in the bottom of the third inning.

With a runner on second and one out the Leopards got back to back to back RBI singles from Garbick, Podesta and Mark Chiapelli.

On the next at bat Joe Garcia hit into a fielder’s choice, allowing Podesta to score from third.

Tongue completed his four innings of work, but not before giving up another run to the Leopard bats.

In the fifth, though, Villalobos surrendered the first UBC run on an RBI double from UBC second baseman Shawn Anderson.

Villalobos worked 2 2/3 innings, giving up one run and registering three strikeouts to tie him with Tongue for the game high.

The Thunderbird pitching staff struggled with control with each of its three pitchers giving up a walk and each hitting a La Verne batter.

The Leopards, however, were sharp, walking just one batter and hitting none.

Defensive play was sloppy for both sides with Sunday’s rain making the infield slick. Each team committed two errors, with one runner from each coming around to score.

UBC’s greatest offensive effort came in their half of the seventh inning as the La Verne error, followed by a Thunderbird home run, brought the visitors to within four.

The Leopards answered and regained their six run advantage, pushing across two runs in the bottom of the seventh.

The Thunderbirds would mount one last offensive effort scoring one in the eighth, before facing senior pitcher Gil Hernandez in the ninth. Hernandez sent the Thunderbirds away from Ben Hines Field allowing no hits and striking out two of the four batters he faced.

The Leopards would have little time to celebrate their win though, as the second half of their doubleheader would soon arrive.

The Leopards’ offense that thrived against wild Thunderbird pitching hit a wall when it faced the Cossacks of Sonoma State University.

La Verne got started early scoring in the first inning.

“The first victory of the day helped us get started in game two,” said junior Todd Farrell.

La Verne’s pitching staff surrendered seven runs in the nightcap while it got only three from the bats that were so explosive earlier in the day.

Though La Verne was playing its second game of the day, they were at no disadvantage. The weekend rain made both teams play two games on Monday, as the Cossacks faced Biola earlier in the day.

“They put a couple of runs on the board and our morale went down,” said Lemas.

The Leopards could not pull out a victory in game two of the double-header, as they were defeated by the Sonoma State Cossacks 7-3.

The Leopards have high hopes for this season especially after this week’s play.

“We could have easily lost three games this week, I don’t think that people thought we could actually play with our competition,” said Lemas.

“We are not going to hit 60 balls over the fence this year, we don’t have big home run hitters. We play as a team, very selflessly,” said Winterburn.

The Leopards are 4-2 going into the opener of the Southern California Intercollegiate Athletic Conference. Their first conference match up will be against Caltech.

The Leopards will face the Caltech Beavers at 2:30 p.m. on Ben Hines Field.