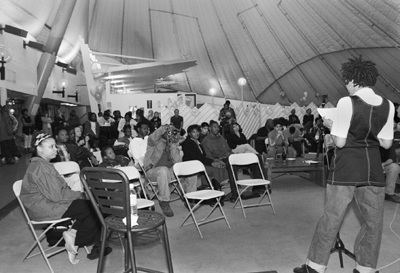 Mo Poetic reads from her poem entitled “The Things I See” during Wednesday’s Poetry Slam in the Student Center. The event was sponsored by the Institute for Multicultural Research and Diversity and the African American Student Alliance as part of Black History Month. The event promoted various aspects of the African-American culture like jazz, hip-hop, blues, and poetry. It was also an opportunity for anyone to tell their stories. / photo by Juan Garcia

by Ryan MacDonald
Editor in Chief

In honor of Black History Month, Poetry Slam was an open mic night where students shared through poetry their emotions about life’s spectrum of experiences. Their stories about inner joys and intimate fears were the backdrop for the students who participated during the evening. With a three-minute time limit, participants in attendance were given the opportunity to stand in front of an audience with music provided by P.S.A.L.M.S. and share their poetic thoughts before an audience of roughly 100.

Junior Ayana Moultrie, who read several poems about her current relationship and her African American heritage, attended the event because of her interest in poetry. “Aside from being part of Black History Month, it’s nice to chill and not stress about school and other things,” she said. “And events like these make me write.”

Nelson D. Brown, who was M.C. for the evening, shared his vision of creating lively environments with poetry everywhere he goes. Brown travels with the Snap Snap Poets, a group he helped originate a few years ago in the Inland Empire. His intentions are to spread positive movements through poetry, he said. His performances, which included a poem exploring the importance of Dr. Martin Luther King, Jr., started the evening’s festivities.

Throughout the month of February, University of La Verne students have celebrated Black culture at events such as this. As a time to recognize the African American culture, February gives students here and elsewhere the chance to come together to celebrate the Black leaders and figures of the past.

“Each event has been very positive,” said Keisha Bentley, director of IMRCD. “We have had a lot of interactive audience participation.”

Bentley also recognized the importance for all students to engage in the activities that are taking place on campus during the month of February.

“Black history is a part of American history,” she said. “And when people have a better understanding of something, it alleviates the ignorance.”

On Wednesday, the entertainment continued in La Fetra Auditorium with the Griot Monologues, where AASA performed live skits about black figures in history. With drums and dimmed lights, students engaged in the performance and the ambiance of the evening.

Junior Tamika Harrison opened the show by singing the African American National Anthem with the audience standing to their feet and joining in. Following the introduction were several monologues performed for Black historians including Mahalia Jackson and Dr. King.

A cultural dance intrigued the audience and put rhythm into their heads while drummers played an African beat. Prizes were given out during a trivia session that followed the event, as students answered questions regarding Black historical figures.