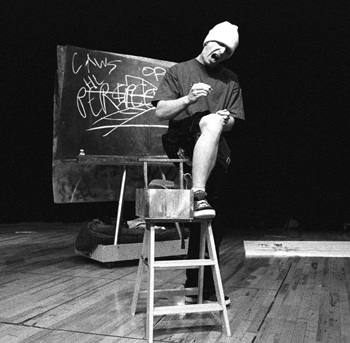 Tuesday afternoon, the Cabaret Theatre provided a forum for discussion as the Institute for Multicultural Research and Campus Diversity presented “Horizon Line”, a play written by Peter Howard. The one-man play follows a teenage boy as he deals with issues of hate crime. Kevin Blake auditioned with the National Conference for Community and Justice for “Horizon Line” and has been doing the show for the past 13 months. Blake, who graduated from Florida Atlantic University with a bachelors degree in acting and directing, portrays nine different characters in “Horizon Line” and said, “I seek out work that can make a difference.” He is seen here enacting one of the characters in the play. / photo by Jennifer Contreras

“Horizon Line,” one of a series of plays sponsored by the Institute for Multicultural Research and Campus Diversity, in collaboration with the Associated Student Federation (ASF) Forum, took place at the Cabaret last week. Addressing the subject of hate crimes, “Horizon Line” is a simple name for such a complex subject.

By dissecting the evils of hate crimes using the life of a 16-year-old boy as an example, the Los Angeles Regional Office of the National Conference for Community and Justice was able to present students with the roots and causes of such actions.

A brief presentation on hate crimes was given before the play by NCCJLA member, Lecia Brooks. Brooks incorporated audience members into her discussion by asking them to read the definitions of “hate crime” and of “hate incident” aloud.

Hate incidents are a freedom of opinion that are protected by the First Amendment; hate crimes are forms of harassment. She mentioned that hate crimes are not only done to people but can also be done to places, such as buildings for religious worship.

Recent hate crimes were also topics for discussion. Within the first two months after Sept. 11, 384 hate crimes occurred. Only 13 of these were prosecuted.

“That’s what makes hate crimes so tragic,” Brooks said. “They are harassed because of who they are.”

However, these categories can be limitless. Someone may perceive someone else as part of a specific group because of his or her appearance, but in reality they are not. Hate crimes are not only directed toward the groups listed above, but can be directed to those who merely appear to be part of these groups. She also added that a federal hate crime law does not exist in the United States today.

Following this, professional actor Kevin Blake from the NCCJLA presented the play. Blake’s first character was Danny, a 16-year-old white male artist, who the play centered around.

In addition to Danny’s character, Blake took on many others, one of which was a skinhead named JD. JD, the boyfriend of Danny’s sister, had a negative influence on Danny. Although Danny had positive forces in his life like his mom, a police officer and a history teacher, he continued to follow JD’s example.

Scratching a swastika in the school’s bathroom mirror out of anger, Danny continued to ignore comments from the positive people in his life. However, Danny’s actions were not ignored. A Jewish teenager saw the mirror and reflected on his religion and his identity.

As Danny’s outlook on others drove increasingly toward hate, he met another big influence that would hopefully change his life. Walter, another artist who met Danny at a tattoo removal shop, told Danny to be proud of who he was.Throughout the play, Danny made references to art. Using a chalkboard as his sketch pad, he energetically illustrated how an artist begins with the horizon line.

On the horizon line the artist creates a vanishing point, sometimes two. When the artist sketches roads from these points, they will eventually meet and create an intersection.

“And stuff happens at the intersections,” Danny said.

The play closed with a memorable quote with the image of a single line on a new page in a sketch book.

“I’m gonna stay out of fights, stay out of trouble, and keep my eye on the horizon line,” Danny pledged.

The play lasted about 40 minutes, and the remainder of the time was set aside for a discussion about the presentation, solutions and hate crimes. At this time, audience members offered solutions to the problem.

Some thought that Danny’s parents needed to spend more time with him and that there needed to be more communication between everyone.

Another member of the audience felt that the Juvenile Hall system should be thought over, and that there should be a way to help kids aside from community service.

After the play, Blake shared with the audience the preparation he took in order to play his characters. He read books and information on the Internet to prepare for his role as a skinhead. Professional playwright Peter Howard, who wrote the play, also did research for this work.

He felt that a performance, as opposed to a speaker, would have more impact on students and faculty. IMRCD chose to present Horizon Line now “in light of all that’s been going on,” Loera said.

In an effort to eradicate hate crimes, Loera finds that this provocative presentation will have a positive influence. ULV is “creating a forum to be educated around the issue of hate crimes,” said Loera. “We would love people to take advantage of this,” he added.

The NCCJLA began performing Horizon Line at the start of last summer. It was only a matter of time before ULV decided to offer the show.

Confronting the issue of Native Americans as mascots was addressed at ULV in October of last year in a performance called “Kick.”

The following month, “Wheels”, a play addressing immigration, was also presented by the NCCJLA. If you missed one of these works, you may have second chance to experience them.

Loera is hoping to bring “Kick” back for a second round in addition to others.