By Campus Times Editorial Board, Christian A. Lopez on April 26, 2002 in Editorials, Opinions 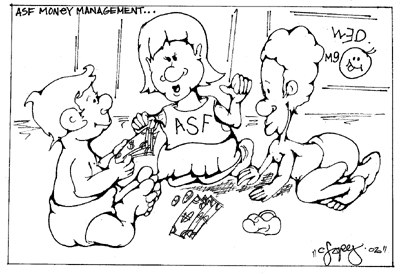 Some say tradition is what this university needs most, and many alumni, faculty and current students agree with this notion. In other words, the school should forget about all the other important stuff (like the law school, tuition rates and faculty salaries) and concentrate on equipping the students with those special memories of annual events that will linger in the students’ memories for decades.

However, in order for this to take place, the university needs to begin providing its students with some quality events that the students can participate in. It will be something everyone will appreciate with good spirits and positive attitudes. What a great idea this is. How untainted and, literally, collegiate.

So it is very appropriate that the Associated Students Federation (ASF) Forum has attempted to initiate the beginning of annual traditions for the school and its student body. “But wait,” you might be asking yourself. “Is ASF really capable of completing that task?”

Well of course they ARE NOT.

Let’s bring everyone up to speed. Just last week, the voting members of ASF decided to spend $750 on a group of rowdy fans. ASF agreed to send these fanatics, as enthusiastic and supportive as they may be, to New York to support the men’s volleyball quest for the national championship. But instead of contributing to the entire student body with something everyone can enjoy, ASF decided to provide only a handful of lucky students with this opportunity.

Everyone else has to get in line. Take a number because your turn is not for a while. Women’s volleyball team, that means you also. Your championships rings are never going to be entirely funded, even though you brought the most recognition to the university than its gotten in years. Go win another championship title and then maybe ASF will understand the significance of your accomplishments.

Also with the start of this new tradition, ASF has opened up the issue of its frivolous spending and infamous history with making poor decisions. These are the types of decisions that have gotten ASF into so much trouble in the past.

So, let the games begin.

How can the entire student body allow its own money to be funneled towards one small group of people?

The assistance in cheering on the men’s volleyball team was probably considered invaluable, but if funds are going to be handed out to send the most devoted fans all the way to New York, there should at least be some organized tryouts!

If the only requirement to receive ASF money includes dressing up like a clown, going into public and acting like a fool, then many students probably qualify for money to spend at their leisure.

Perhaps there should be auditions, otherwise how will we be sure the best clowns are going?

Cheering loudly at a volleyball game may be important, but does it really constitute spending so much cash? Students should demand that their money be spent in ways that will benefit all of the student body because, if not, ASF will soon be getting itself in over its head.

And haven’t we all learned enough already from ASF mistakes?