By Jennifer Contreras, Jennifer Dodd on April 19, 2002 in News 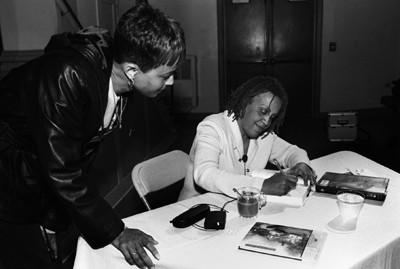 University of La Verne’s Master of Science, Leadership and Management Program and the Women’s Leadership Association presented Coffee, Cake and Conversation with Dr. Ella L.J. Edmondson Bell on Monday. Bell, a co-author of “Our Separate Ways: Black and White Women and the Struggle for Professional Identity,” spoke in Founders Auditorium. Bell also signed copies of the book before and after the presentation. Tracey Barnett, a first year student in the MSLM program, said she has just started to read the book. Bell spoke on the process of writing the book and the intentions behind it. “It was long needed in terms of telling the black women’s experience,” she said. “It is also to create a healing dialogue to occur between white and black women.” Beside Bell sat MSLM students Mike Driebe, Maria Rice-Taylor and Kathy Duncan, who asked questions about the book. / photo by Jennifer Contreras

The University of La Verne Master of Science in Leadership and Management program, with the Women’s Leadership Association, hosted a conversation and book signing on Monday with Ella L.J. Edmondson Bell.

Bell discussed her book, “Our Separate Ways: Black and White Women and the Struggle for Professional Identity.”

The book investigates the relationships women have with one another in the corporate world focusing on gender and race relationships.

It looks at the different ways women build connections with one another in executive and managerial positions.

Even in the year 2002, Bell said women executives and women in managerial positions need to look at what happens when women don’t come together and support one another.

Bell also said that she is not proud of how successful black men have behaved in corporate America.

“Don’t get me wrong,” she said. “I am so glad to be able to say that black men now head up three out of the four most prestigious companies in the United States. But, there was no mention in my research on who was in the pipeline in terms of black women. This is what inspired us to write the book.”

Isolation, alienation and lack of mentors or sponsors are among the problems faced by trailblazing women, Bell said.

The issue of race is an additional obstacle. Bell said that because of cultural differences and different backgrounds, black and white women form relationships with other women in business very differently.

White women tend to isolate themselves; they rarely ask for support because they feel they should be able to do all it themselves, she said.

Black women, on the other hand, are more inclined to seek support when they need it, Bell said. They do not feel the shame that white women do about asking for assistance.

Women, regardless of their race, can and should support each other, she said, if only they could find a way to network.

Not only do white women have preconceived ideas about black women, but they also have them about themselves, she said.

Women in the corporate world struggle with the issue of having to integrate their own uniqueness, without being condemned for it. Bell used herself as an example and explained that for years she straightened her curly hair to fit in.

Eventually she became tired of doing this and decided to go with dreadlocks.

She told the audience Monday­ – roughly 50 students and faculty members – ­about how she was nervous the first day she went to work with her new style. She held her breath waiting for someone to comment, she said.

Bell added that healing may be necessary if women are to overcome all of the stereotypes and fear they have about forging relationships with one another.

Women of any age who want to develop their leadership abilities without having to sacrifice parts of their spirit and soul would be interested in this book, she said.

In addition to speaking about workplace issues, Bell was full of praises for her La Verne hosts faculty members Carol Sawyer and Paul Nelson.

“La Verne is so lucky to have these two teachers here,” Bell said. “When they asked me to come and speak, I was so surprised and happy that I got to be on the book list,” she said.

“After reading the book and meeting Bell personally, I highly recommend this book,” said Mike Driebe of the MSCM program. “Being a white male, I would recommend the book to any male in a leadership position.”

Sylvia Mendoza, wife of Driebe, said, “This presentation put a perspective out that many don’t hear about. It shed light on an obscured subject. Beyond color is culture.”