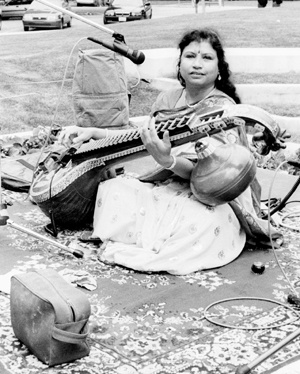 Geetha Bennett played the Veena instrument at the International Festival, which took place on April 16. Bennett enlightened the festival goers by playing Southern Indian music. The festival is held annually at the University of La Verne to promote cultural awareness. / photo by Manuel Hernandez

“The purpose of the event is to celebrate and share our diversity with one another,” said Marcy Garcia, international student adviser.

Booths celebrating eight different countries were set up in the quad. Mexico, Japan, China, Cypress and Brazil were among the countries represented.

The booths showcased each country’s unique food, clothes and traditions. Each booth was given $20 by the ISC to buy food representing their country.

On Wednesday, the festivities continued when Davenport went international, offering a Mediterranean cuisine and Lebanese music.

From 1 to 2 p.m., reports from students and faculty who went to Guatemala and Ecuador for January Interterm were given in Hoover 129.

Phil Hofer, International Student Center director, said, “Two groups of three students were able to share their experiences abroad, including what they learned, and what they found fun, challenging and different. The ISC felt that the sharing of these experiences fit right into the theme of the festival.”

On Thursday, Jean Zaru, presiding clerk of the Ramallah Friends Meeting in Palestine, spoke to students, faculty and administrators on “Struggling and Hoping: Reflections of a Palestinian Peace Activist.”

One of the founding members of Sabeel, a Palestinian Liberation Theology Center in Jerusalem, Zaru has been the key speaker at numerous conferences around the world. She is a peacemaker and is committed to nonviolent solutions to end the occupation of Palestine.

Dr. Alfred Clark, professor of humanities and associate vice president of academic affairs, said, “I was very pleased that we had a woman of such stature here. Even though Zaru leaned toward the Palestinian side, she stressed that she was open to a peaceful solution.”

In her speech, Zaru stressed that there is no military solution for both sides, who have suffered well beyond what is necessary.

After the speech, Zaru answered questions.

Garcia said students who were afraid to admit their Palestinian ethnicity were deeply affected by her speech.

She said students came up to Zaru to give her a hug and cried.

Garcia said the students enjoyed putting on the event.

“We did all this in two weeks. It is usually a bigger festival, but we all had a great feeling about how it turned out.”

Hofer added, “We were very pleased with how the festival turned out, especially our guest speaker.

“She dealt with a very relevant and sensitive issue and we were so happy that it was a success,” he said.