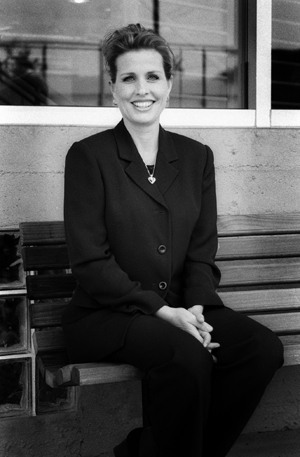 Janice Sullivan, Administrative Secretary, joined the Communications Department staff in January 2001. This was a new position opened for the communications department to relieve faculty from an overload of administrative duties. She earned her associate of arts degree from Citrus College in 1998, worked there, and then accepted the secretary position at the University of La Verne, where she enjoys the friendly atmosphere. / photo by Amy Babin

Her freckled face and welcoming smile are the first things people notice upon walking into the Arts and Communications Building.

Her contagious laughter, motivating words and listening ears make her a necessity for those she comes in contact with.

Her name is Janice Sullivan.

She is the woman behind the scenes of the communications department.

Born to parents who were not even old enough to drive, Sullivan arrived in the world a very healthy baby girl.

With her mother, being only 16 and her father, just one year her senior, Sullivan learned the meaning of responsibility from the example set forth by her parents.

“I give them so much credit now, being an adult and knowing how hard parenting is,” Sullivan said.

Sullivan was in ninth grade when her family walls began to deteriorate. Her parents began going through the process of divorce when she was only 14 years old. Finally, in Sullivan’s junior year in high school, her parent’s divorce was official.

Preceding Sullivan’s high school graduation, her mother moved to Utah and her father remarried. Sullivan took this opportunity to be on her own and decided to move into her own apartment.

After she found a job in Los Angeles, Sullivan decided to continue with her education part time. However, she found it difficult to live on her own while working to support herself. As a result, her grades suffered immensely.

“I knew I had to work because I needed a paycheck, so my education was not a priority,” Sullivan said.

Sullivan worked and lived on her own when she was 20, but when she was on a vacation in Hawaii her life changed forever. It was the type of vacation most only fantasize about.

Sullivan traveled to Hawaii with friends to visit family, and when she was there she met a Lance Corporal in the Marine Corps. His name was Kevin Sullivan, and he was stationed in Hawaii.

“My eyes found him from across the room, but I never thought he would come talk to me, but he did,” Sullivan said.

Through letters and overseas phone calls, their relationship blossomed, regardless of the distance.

One day shortly after her vacation, Sullivan received a phone call from a cousin who lived in Hawaii. She offered Sullivan a place to live if she wanted to move to there, and she jumped at the opportunity.

Twenty year-old Sullivan packed up and never looked back. Just months later at the poolside, Sullivan encountered yet another proposal, this time for her hand in marriage. With no ring and no expectations, Sullivan said yes.

The newly engaged couple was wed three months later outside the justice of the peace courthouse in Honolulu, Hawaii for $25.

“I just knew that he would be the man that I would marry,” Sullivan said.

Sullivan was sure that her decision to marry was right , even if their families were counting down the days to divorce. However, Their story-book love remained intact.

Three months later, Sullivan got pregnant with her son. Neil, who is 17, is a junior at Bonita High School in La Verne. After the birth of her first child, Sullivan and her husband packed up and moved to Dairy, New Hampshire, located on the border of Massachusetts.

Two and a half years later came her second child, Ashley, who is now an eighth grader at Ramona Elementary School.

Sullivan and her husband were ready to settle in and buy a house, but they were not content on the East Coast.

“We were ready to buy a house in Massachusetts, but then neither Kevin nor I thought that was what we really wanted. So we packed up everything that we owned into a Blazer and with two small children we drove cross-country to California, where we bought a house, ” she said.

The first year back in California was great for Sullivan.

She was once again near her family. Her mother had moved back to California from Utah years earlier and Sullivan spent much time with her.

The day before Mother’s Day in 1989, Sullivan’s mother suffered from a brain aneurysm and died at the age of 42.

“I was just glad that I got to spend that one year with her as an adult,” Sullivan said.

Sullivan has since learned to cope with the death of her mother, but stated that “it was the hardest thing that she ever had to deal with.”

Upon returning to California, Sullivan applied for a secretarial job in the Health Occupation Department at Citrus College while attempting to finish the dream of obtaining a college degree.

Sullivan eventually graduated from Citrus College with honors and her associate’s degree. She had planned on attending Long Beach State to study industrial design, but her recent interests in becoming a peace officer occupied her thoughts.

“My father was a sheriff; my uncle was a highway patrol man; my husband is a sheriff, so the field really intrigued me, but one thing held me back from that goal, and that is my children,” Sullivan said.

Instead Sullivan decided that she would go back to school and get her bachelor’s degree.

Sullivan heard about a job offer as the communications department secretary and she applied and was granted an interview.

Sullivan took a pay cut leaving Citrus College, but felt that La Verne was the place for her.

“It was a step that I knew that I had to take; I wanted to further my education, and with the tuition remission policy here at the university, it was a perfect fit,” Sullivan said.

Sullivan said that it is the people that she works with that make the job worth while.

“It is not a regular 9-to-5 job. The personalities of the students are great. They never allow me to feel down because there is always someone there to keep me happy,” Sullivan said.

Sullivan has been well received by everyone in the communications department, students, faculty, and staff included.

“Janice is the core of our department,” said Shane Rodrigues, radio/television assistant. “She keeps us together. She always knows what is going on. She keeps us on track.”

Sullivan is unsure where the future will take her, but the students and faculty hope that she is around for a long time to come.

“Who knows what my next chapter will be; I don’t have a set agenda,” Sullivan said. “I’m just me.”