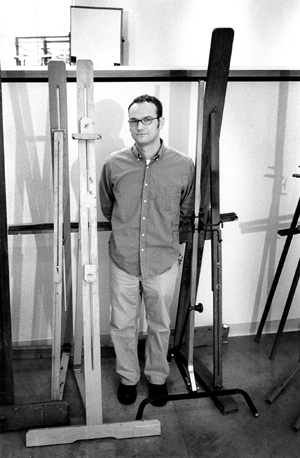 Ohio native Dion Johnson, ULV art studio manager, made his way to California where he earned an M.F.A. from Claremont Graduate University. Johnson, 26, has been featured in such art publications as “dialogue, voicing the arts” and “Themes Out of School: Art and Education in Los Angeles,” a publication for the Creative Artists Agency. This is his second year as the art department’s studio manager. He also teaches several classes. / photo by Jennifer Contreras

Ohio native Dion Johnson, has led quite an accomplished life in his mere 26 years. Not only is he in his second year as art studio manager at the University of La Verne, he is also an accomplished artist, teacher and scholar.

His artwork has been showcased in various galleries, including the Rebecca Ibel Gallery in Columbus, Ohio, and the Bill Maynes Gallery in New York.

After obtaining his undergraduate degree at Ohio State University, he took a year off, using that time to figure out if he could really make it on his own as an artist.

“I had a loft in downtown Columbus and I used that time to kind of prove to myself that I could work on my own,” said Johnson.

After that year, Johnson made the decision to move to a city where there were more opportunities for artists and where he could attend graduate school. He considered New York, but ultimately decided on Los Angeles as his home base.

“I’ve been in L.A. for 4 years now,” said Johnson. “It’s a really rich environment, especially as an emerging artist.”

Johnson explained how the move affected his art.

“Moving to L.A. really gave me the feeling of more possibilities. My artwork, in terms of colors and subjects, grew and changed also. Space just seems wide open.”

After moving to Los Angeles, Johnson obtained his MFA at the Claremont Graduate University and his artwork received acclaim here as it did in Columbus.

Johnson has been featured in such art publications as “Dialogue, Voicing the Arts and “Themes Out of School: Art and Education in Los Angeles.”

After earning his MFA, Johnson taught drawing and design at Pitzer College before arriving at ULV.

As art studio manager here, Johnson has a myriad of responsibilities. He oversees the galleries and exhibitions being installed, handles the opening receptions, assists the art historians and works one-on-one with painting and sculpture students. Johnson also is teaching an independent study in painting this semester and has taught life drawing and advanced painting classes.

Ruth Trotter, art department chairwoman said of Johnson: “It has been excellent working with Dion. His calm and gracious temperament keeps the art department running smoothly. (And) he has a heart of gold.” Trotter said Johnson’s active career as a painter has added an important dimension to his role here. “I think that with Dion also being a young person, just starting out in his own career, he is really able to connect and have the same point of reference with the students he works with.”

As for Johnson’s future plans, he said: “I want to continue to stretch what painting can do. I like finding new ways to reinvent and redefine the dialogue of painting. I still think of myself as a beginner and I see the future as wide open.