By Jennifer Contreras, Melissa Betsy Lau on May 17, 2002 in News 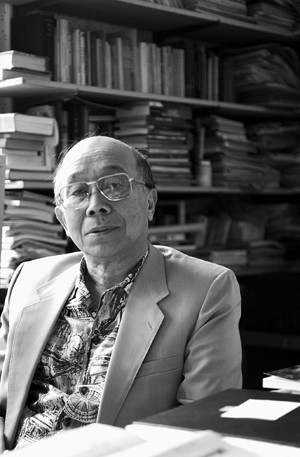 John L. Jang, professor of government and global studies, will retire at the end of this semester. Jang, who gave his services to ULV for 35 years, feels it is time to move aside and to allow room for “new blood.” Besides his work as a teacher, Jang started the Model United Nations program at ULV, which recently traveled to New York. / photo by Jennifer Contreras

All good things must come to an end. But sometimes the end is just the beginning and for Professor of Government and Global Studies John Jang, this could very well be true.

Jang, who has worked at the University of La Verne for 35 years, will not be returning for his 36th. He has chosen this year to be his last at ULV so he can retire.

A native of China, Jang has used his Chinese heritage and American experiences to urge understanding between Americans and the Chinese throughout the years. He has worked with sister cities in America, as well as and China, to improve relationships between them.

Although he has no siblings in China, he makes it a point to travel there about three to six times a year.

“Well, I like to travel. That’s why I’m in international studies,” he said.

After retirement, Jang plans to continue his mission of working to improve relationships between American cities and their cities in China. He has already done this for Riverside and plans on doing this for Ontario.

By conducting seminars in China about the U.S. and U.S./ China relations, he hopes to achieve this. These seminars will also include the topic of international trade.

He has already held lectures and seminars in the United States about understanding the Chinese. He believes one of the biggest mistakes a person can make is to not understand another culture. For example, Jang feels that during the Vietnam War the United States sent young soldiers into the country without knowing much about the culture. Jang wants to change this.

“I try to introduce the Asian cultures to the American people. What better way to do it than through the vehicle of teaching,” he said.

And so he arrived at ULV. He began here in 1967 and since then has made quite a bit of changes in the university community as well as outside.

In 1969 Jang began a program for short-term off-campus field studies. Prior to this, he said, the school only allowed one-day field trips.

One example of this, is the trip to Hawaii that took place this past January interterm.

Professor of business administration and economics Ahmed Ispahani appreciates the work Jang has done for ULV.

“Dr. John Jang has been one of the finest professors of the university,” he said. “We go back about 35 years. He is a very distinguished historian. ULV has been very fortunate.”

He also added that Jang has brought many important people to speak at the university.

Ispahani also admires the work Jang has done for the U.S. and China.

Ispahani explained that when he went with Jang to China, the major of Jiang Men drove them to the airport.

Ispahani also admires the fact that Jang has an interest in both America and China. According to Ispahani, there are often people who take interest in one or the other.

He explained that China is an important country, especially now that it is part of the World Trade Organization. In fact, it now has the second largest economy.

“He gives very informative lectures,” Corpuz said. “He taught me a lot about a subject I wasn’t familiar with.”