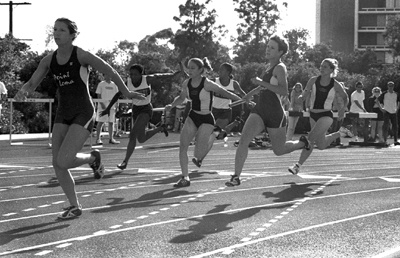 Point Loma’s Katie Kobielush waits for teammate Jana Best to hand off the baton, while Azusa Pacific’s Janessa Lepp waits for Adrienne Crunican. In the far lane, the University of La Verne’s DeJuana Satchell reaches for the baton from teammate Adrienne Clayton. Claremont-Mudd-Scripps won the 4×100 meter relay at this year’s Claremont Invitational, Saturday in Claremont, with a time of 48:22 seconds. / photo by Tom Galaraga

As participants in the Claremont Classic Saturday, members of the University of La Verne track and field team attempted to secure spots for themselves in the National Tournament to be held next weekend in St. Paul, Minn.

Many of the ULV athletes have already turned in provisional times in their respective events, which gives them spots in the tournament, providing they remain one of the top in the nation. But any improvement on a provisional time is abundantly welcome.

The meet, which was held at the Burns Track Complex in Claremont and hosted competitive teams such as UC Santa Barbara, UC Riverside, Long Beach State, Cal State Fullerton and Northridge, and USC, found the Leopards ultimately unable to improve as desired.

There were, however, many positives to the meet, said head coach Pat Widolff. Widolff emphasized Brandon Tedrow’s performance as the “main positive” for ULV.

Tedrow was able to mark three personal records on the afternoon. In the pole vault, he catapulted over the bar at 13’07.25″. Tedrow also managed eighth-place finishes in both the discuss and javelin with respective distances of 55.70 and 47.36m.

Tedrow feels that his performance in the pole vault is acceptable but shows much room for improvement before he takes his automatic bid in the decathlon to St. Paul.

“I can improve almost a foot by Nationals,” he said.

Soakai turned in hurls of 11.34m in the shot put and 38.10m in the discuss. Kiamco, a freshman, tossed 42.34 m in the hammer throw, which, Widolff said, is an impressive mark for a freshman. Waters, another automatic qualifier for the National Tournament, turned in a fifth-place distance of 13.78m in the shot put.

Will Lawson provided another highlight to the Classic with his first-place finish in the 400-meter hurdles with a time 53.46.

Monica Martinez of the women’s team coupled her two finishes in the 400-meter hurdles and the steeplechase with respective times of 66.61 and 12:33.4 to become a top highlight for ULV.

Although the Leopards tallied many high finishes in the Claremont Classic, they were unable to improve on the many provisional qualifying times earned in the Southern California Intercollegiate Athletic Conference Championships.

Dejauna Satchell was one of these qualifiers in both the 100 and 200-meter dashes. Her time of 12.12 in the 100-meter gave her the honor of holding the SCIAC meet record and the seventh highest time in the nation for the season. This time, although not an automatic qualifier, is a “high provisional” time, which, according to assistant track and field coach Will Darity, gives an athlete the opportunity to feel “pretty good” about her chances. Satchell also holds a high provisional time in the 200-meter of 24.92, which she also earned at the SCIAC Championships.

Also giving themselves provisional times were male sprinters Dimitri Watson in both the 100 and 200-meter runs and Eric Thomas in the 200-meter. Watson turned in times of 10.80 and 21.77 in the events during the SCIAC Championships. Thomas managed .1 second better in the 200 with a time of 21.76. These times, although respective and on the provisional list, must be improved at least .2 to .3 seconds to have a serious chance of being granted a spot in the tournament, said Darity.

Three ULV athletes do not have to harbor any worries about the provisional list during the last events of the season.

Will Lawson has already qualified automatically on several occasions for the 400-meter hurdles. Lawson looks to win the National Championship in this event as he has earlier stated that it is his event.

Waters’ throw of 13.76 meters in the shot put gave her the sixth best throw in the nation this year and earned her an automatic spot at Nationals.

The third of the three Leopard automatic qualifiers is junior Brandon Tedrow who has qualified in the decathlon as a result of his performance at the Mt. SAC Decathlon in Azusa. He accumulated a total of 6,488 points, one of the top five in Division III on the year, and was awarded an automatic bid. The bid marks Tedrow’s second appearance in the Tournament in as many seasons.

Addressing his individual chances for Nationals, Tedrow emphasized the pole vault as a “pretty big event” that will “make or break” his chances to leave with the Championship in the decathlon.

“The five that are going for sure are all going to come back All-American,” Tedrow said. He expanded to say that this is a “pretty good bet.”

“They have all had plenty of time to get ready for it. The competition is really good though, so it’s hard to predict,” Widolff said.

Whatever its chances for those that have already made the National Tournament, ULV still entertains one last hope to improve on its provisional qualifying times for those not already guaranteed spots, Darity said.

That chance is at 10 a.m. tomorrow at the Whittier Invitational.