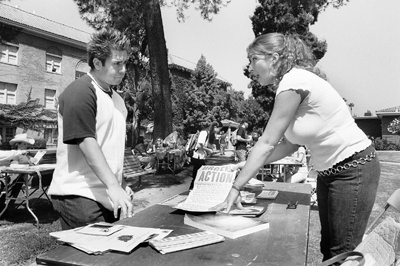 New clubs and old clubs came together to recruit and advertise at the annual Club Fair on Sept. 18 in the Quad. Senior Kim Reed has initiated a chapter of Amnesty International and has recruited students, including freshman Oliver Garispe, to join. The first meeting of the year for the club was Wednesday. More meetings will be announced. / photo by Jennifer Contreras

To help students understand the University of La Verne’s various clubs and how to join them, a Club Fair was held last week on the the Quad.

Clubs provided information such as a description of what each club was about and the process of signing up.

“The fair is an opportunity for new students to get acquainted involved with the different clubs,” said Deborah Gordon, director of campus activities and commuter programs.

“The idea of a club is to give students the opportunity to be social, meet people, create a partnership, have a common cause,” Gordon said.

One club present was the International Student Organization, which organizes trips and events for participating members.

Some trips on the agenda include those to Catalina Island, Yosemite and San Francisco, said Emily Hofer, a student worker at the International Student Center.

“Among the advantages of joining are becoming more involved with the international community and support diversity,” Hofer said.

The ISO holds meetings at 5 p.m. every Monday.

Students may sign up at that time, or anytime at the ISC. For meeting locations, call the International Student Center.

Another organization at the fair was the Latino Student Forum.

“One of our goals is to promote cultural awareness,” said Erick Vasquez, chairman for the association.

A major event for LSF is the Annual Latino Heritage Fiesta, which will take place on Oct. 14.

Other events LSF plans to sponsor include the Day of the Dead Altar at Wilson Library and the annual Posada on Second Street.

For more information about these events, e-mail Vasquez at vasqueze@ulv.edu.

Gordon said the fair was also an opportunity for the clubs to show some of the changes each has recently implemented.

Among changes this year are the new mandatory Leadership Training Week and the requested Adviser Training Day, Gordon said.

The Leadership Training Week will take place from Sept. 30 to Oct. 4.

“It is a week of training for campus clubs and organization’s executives,” Gordon said.

For more information about all these clubs and organizations, the Leadership Training Week and the Adviser Training Day, call Gordon at extension 4251.