By Jennifer Contreras, Tim Tevault on September 27, 2002 in News 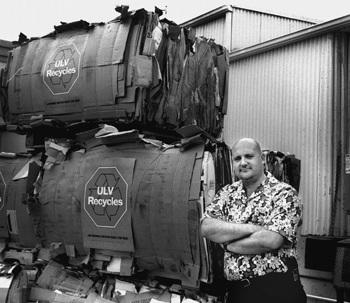 With the purchase of a cardboard baler, the Operations Department has collected 5,000 pounds of cardboard that was picked up Thursday. Robert Beebe, assistant director of facilities management, said that the machine was purchased during the summer for $8,000, but will be paid off with the money saved on refuse hauling and income from recycling. / photo by Jennifer Contreras

Upon returning to school earlier this month, University of La Verne students were exposed to something they had never seen before: a recycling program that is not only up and running, but actually benefiting the school.

Not everyone may have noticed them, but blue recycling bins have been popping up everywhere around campus.

Robert Beebe, assistant director of facilities management, is excited about the program, which has been in the works for approximately two years. He said that not only will the new and improved program help the environment, but it will eventually benefit the University economically.

Because the University is charged for its garbage pick-up by the ton, it is saving money since a lot of the trash is being thrown into the new recycling cans.

Not only is the tonnage being reduced, but ULV is also being paid by the ton for the paper and cardboard it recycles.

Another way ULV is reducing its garbage costs is through the purchase of a trash compactor. With this machine, the number of times trash needs to be picked up is reduced, saving even more money. From Aug. 1 to Sept. 20, there has been only one trash pick up from Waste Management, the city of La Verne’s trash contractor. Normally, trash is picked up twice a week at $220 per haul, saving the university nearly $2,000 so far since Aug. 1. Beebe said this is a great way to start off the school year.

“Every semester when they start up, particularly the fall semester, students move in, departments are getting ready and there is just oodles and oodles of trash,” he said.

In addition to a trash compactor, the department also purchased a cardboard baler for $8,000. This way, cardboard can be compacted, wrapped up in bales that weigh roughly 1,000 pounds, then sold to an independent buyer. Currently, Beebe has about 4,500 pounds in bales ready to be sold.

“The savings from the garbage is going to pay for the baler in the first six months,” he said, adding that the compactor should be paid off anywhere between six and 12 months. “We’re saving money because that’s 4,000 pounds that did not go into the garbage can.”

Beebe has contracted RSI Consulting for four years to pick up ULV’s paper. Although ULV is getting paid to recycle, the school will not see all of that money until the blue recycling cans that RSI bought for ULV are paid off. Beebe has a plan worked out with the company so that $150 a month will be taken out of the money made on recycling.

Hooking up with RSI meant breaking ties with ULV’s former recycling company, Alpine Recycling. However, parting with it was not necessarily a bad thing for Beebe.

“The happiest day was when I got to fire Alpine Recycling, who was doing nothing to help us at all,” he said.

What many people on campus do not know is that the blue recycling bins are for paper only. This is causing a problem because regular trash is being thrown into them. Recently, Beebe received a report back from RSI saying there were definitely contaminants in the load of paper.

Currently, paper and cardboard are the only things being recycled on campus. Beebe said that eventually he would like to have other items like plastic and aluminum recycled, but right now the focus is on paper.

“I’ve been trying to tighten the screws on that a little bit and tune it up.”

Sodexho, ULV’s janitorial service, and Environmental Care, ULV’s landscaping service, are teaming up to assist in the effort to recycle.

When emptying trash on campus, each bag is color-coded-blue or beige trash bags for regular trash, and clear bags for recyclable trash.

This makes it easy on the Sodexho’s workers to tell the two apart, and for the recyclable bags, it makes it easy to see inside and be able to pull out anything that cannot be recycled.

Beebe is also teaming with Davenport Dining Hall, which was recently taken over by Sodexho to pick up their cardboard. Before, they were being charged to get their cardboard picked up by Waste Management. Now, they are getting it picked up by Beebe; this saves them money and adds to the University’s cardboard total. Meanwhile, Environmental Care’s workers normally deal with picking up cardboard. Beebe said that if cardboard is simply left by trash cans, it will get picked up and baled.

Also lending their support is the Associated Students Federation (Forum), led by President Kim Reed. Reed said that the recycling program is already making a difference and that everyone in ULV should make sure to recycle.

Beebe said although the program is doing well, he wants to do more.

“I want to do phenomenal,” he said.