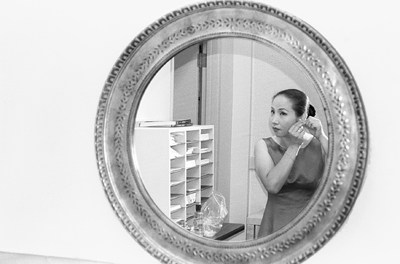 Soprano Hae Kyung Rhee earned her Bachelor of Arts from Yon-Sei University in Seoul, Korea and her Master of Fine Arts and Doctor of Music Arts from UCLA. Accompanied by Scott Farthing, Rhee performed selections from the operas of Mozart, Handel, Verdi and others on Friday, Sept. 27. Rhee teaches voice at ULV. / photo by Bailey Porter

As part of the Fall Concert Series, the University of La Verne’s Music Department pulled off another memorable night of music on Friday in Founders Auditorium, as Scott Farthing, pianist, and Hae Kyong Rhee, soprano singer, took the stage and gave their audience a riveting and unforgettable performance.

Everyone waited in anticipation for the night’s event to begin. As the lights dimmed, the performers were greeted with an exciting round of applause.

The stage was beautifully decorated with flowers; Rhee wore a crimson red dress that was so nicely complemented by the black tuxedo worn by her accompanist, Farthing.

The mesmerizing performance started with “V’adoro pupile” from “Giulio Cesare.” This was the first of 10 sets Rhee would delight her audience with her voice for the night.

Rhee’s face shined with each set performed. Vocally, she had an amazing range coupled with the ability of expressing emotion for each song, whether it was excitement or sorrow.

Rhee attributed the captivating glow in her eyes and face when she performed to her love of music.

“I just love singing,” she said. “It doesn’t matter what it is or with whom, I love singing.”

When her voice rose, Farthing’s tempo increased and when her singing was soft and subtle, his playing slowed accordingly.

Similarly, Farthing contributed to the melancholy sound with his somber piano playing and he accompanied Rhee’s happier songs with more cheerful sounds.

The audience could not help but notice how well these two performers complemented each other.

With unshakeable composure, both performers continued on through the distraction of Rhee’s earring dropping, a baby crying and an audience member’s cell phone ringing in the auditorium.

To minimize the distractions and allow the audience to gather themselves, Farthing and Rhee exited the stage after each set.

“If it had been me, I would have definitely lost my place if my earring fell or a baby started crying,” junior Licet Lopez said.

Junior Amber Evans also agreed with Lopez and said, “They were definitely professional in the fact that they didn’t let things that most of us would consider major get in the way of what they were doing.”

The second half of the recital began as Rhee surprised her audience by entering the stage, this time wearing a beige dress and a pearl necklace.

The sets following intermission were more cheerful, and Rhee, although seemingly confident through the entire recital, now looked more relaxed and at ease.

This could be contributed to the fact that Rhee felt more comfortable singing the two Korean songs she sang.

“I think the most memorable part of the night for me was performing the Korean arts songs,” Rhee said. “Although most couldn’t understand what I was saying, I think the energy from the songs conveyed what they were about, and I felt most comfortable doing them.”

The comfort level in Rhee shone through so brilliantly that the audience was unable to contain themselves and started applauding after each song instead of each set.

“I love working with her. She’s just a very nice and lovely person,” Farthing said. “She doesn’t have an ego, and has a beautiful voice.”

When asked about why they worked so well together, Farthing said that their love of music and the voice was perhaps the biggest reason.

“We only had three rehearsals but he’s always been very supportive of me and we often take breaks together,” Rhee said.

The end of the concert brought a loud applause from the audience.

Their final appearance for the night took place to a standing ovation, one that was well deserved.

The night’s performance highlighted the talents of two of ULV’s outstanding faculty.

Rhee, is a voice instructor for the ULV Music Department. Farthing is assistant professor of music.

On the Calendar
Core: the unnecessary necessity