By Campus Times Editorial Board, Christian A. Lopez on October 25, 2002 in Editorials, Opinions 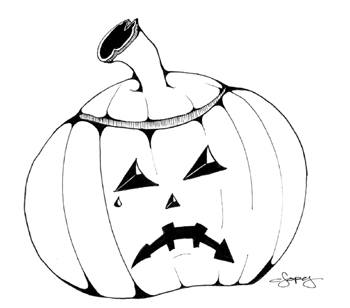 The setting: dark hallways and creaky wood floors. Sprawling ivy darkens the windows and you find yourself all alone.

Sounds like a typical scene from a cheesy horror flick, right? Well, what if you shift that scene to Founders Hall, where many have claimed to have felt a presence from those beyond the grave? Suddenly that scary scene from a movie becomes the reason why you avoid heading to the computer lab at night.

With Halloween around the corner, the moon is set on bringing out the screams, bangs and footsteps of the ghosts of the University of La Verne.

For many years, members of the ULV community have claimed witness to the paranormal. Buildings like the Stu-Han residence hall, the International and Study Abroad Center, Founders Hall and Dailey Theatre have spooked people for years – each building carrying a different chilling tale.

So gather around the campfire folks, and snuggle close! It’s story-telling time

Former international student organization coordinator Marcy Garcia reported some time ago that in 1993, a young girl walked into the house occupied by the International and Study Abroad Center, and was looking around.

After a few minutes, the girl told Garcia that the house was once owned by her grandmother, who was burned to death in a kitchen fire – the kitchen that was later turned into Garcia’s office.

After that, things in Garcia’s office would move around and hide.

But even prior to her knowledge about the death, Garcia had always felt like someone was watching her.

In wing two of Stu-Han, the story goes that a student killed herself in her room. In the past, residents from that room claimed there is a constant banging on the walls and ceiling accompanied with heavy breathing and loud snoring. Students swear that it is not coming from their neighbors. They also swear that it is the sound of the girl choking to death.

In August of 1978, former audio-visual director David Glasa went over the edge after his girlfriend broke up with him.

He committed suicide in the audio-visual office located at the end of the hallway on the bottom floor of Founders Hall. After that, students and faculty have alleged they have heard the sounds of doors slamming and rapid running in the hallways of the building.

In the office itself, student workers and current AV director Doug Waite have all professed strange occurrences like the tinkering of various equipment, the cold, shafty feeling in the office and the sounds of not being alone. The ghost of David Glasa is still felt to this day.

But he is not alone. He could be dancing the hallways with Gladdys E. Muir.

She was a professor of Latin and Spanish who retired to teach part-time at ULV after teaching for more than eight years at Manchester College in Indiana.

In 1967 she fell down the stairs on the east side of Founders Hall, adjacent to the place currently occupied by the seal and kiosk and died from her injuries. Perhaps the sounds of rapid running and slamming doors comes a pair of spirits playing a game of hide and seek.

Beginning in 1983, a series of paranormal claims have gripped Dailey Theatre. In 1979, ULV theater student Jim Henderson and a friend went camping in the desert to shoot footage for a film project.

While they were there, the two were gunned down by a pair of men. The story goes that the two men wanted a ride and when Henderson and his friend denied them the ride, they left and came back with guns.

Subsequent to Henderson’s murder, students in the theater maintained that they felt a presence in the dressing room.

As if these ghostly apparitions are not enough, there is more. Does anyone know about the dirt from an Indian burial ground used to fill the ground between the Arts and Communications Building and F-Building of the Oaks?

Or how about the thick cast of mist that covers and pushes over the football field at Damien High School?

A word of advice: keep your loved ones close and your eyes peeled. Once the lights are out and the moon is up on all hallows-eve, there is no telling what is lurking behind you.

Watch your back when walking around after the sun has set for ghosts of all kind. And most of all: do not go out alone.