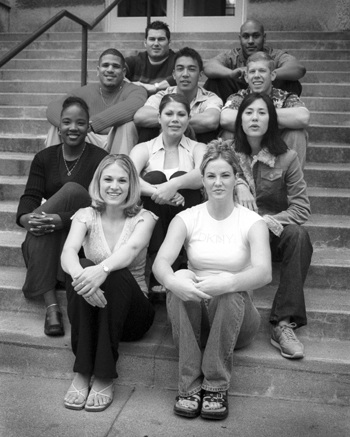 The stage was set Monday night for a Tropical Paradise. Tiki torches lined the walkway to Founders Hall and soft Hawaiian music set the tone for the first of the annual Homecoming events: Illumination.

Prince Daryl Baltazar was nominated by Sigma Alpha Epsilon fraternity. Baltazar is an international business major. He has been involved in SAE, Model United Nations, American Marketing Association, the International Student Organization and the Inter-fraternity Council.

Prince Geoffrey Gillison was nominated by Phi Sigma Sigma Sorority. Gillison is a criminology major. He has been an active member of the Brothers’ Forum and has played on the ULV football team for two years.

Prince Neal Houska was nominated by the College Panhellenic Association. Houska is a broadcasting major. He has been involved in SAE, the Iota Man program, is an Orientation Week Leader and plays on the ULV baseball team.

Prince Brandon Pollard was nominated by the African American Student Alliance. Pollard is a business administration major with a concentration in marketing. He has been a member of the Chi Delta Omicron Fraternity, the Brothers’ Forum, AASA and has played on the ULV football team.

Prince Bobby Vail was nominated by Sigma Kappa sorority. Vail is a movement and sports science major. He is a member of Phi Delta Theta fraternity and is a member of the ULV track and field team.

Princess ShaMira DeJurnett was nominated by AASA. DeJurnett is a liberal studies major. She is currently the president of AASA and is involved in Sisters’ Circle and the ULV gospel choir. DeJurnett is also one of the head resident assistants.

Princess Liz Lucsko was nominated by Sigma Kappa. Lucsko is a photo journalism major. She is a currently the president of Sigma Kappa and is a member of the ULV track team, the Alpha Chi Honor Society and is the chief photographer for La Verne Magazine.

Princess Crystal Marks was nominated by SAE. Marks is a public administration major. She is a member of the swim and dive team, the ULV track team, Sigma Kappa and is the president of the Leo Fan Club. 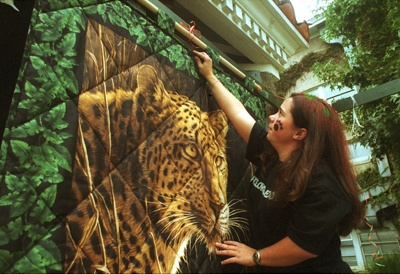 The University of La Verne Homecoming Spirit Booth encouraged students to paint their faces orange and green in support of school spirit. Associated Student Federation Forum commissioner of activities Dana McJunkin, freshman, was the committee chair of the booth and even decorated her VW Bug for the occasion, naming it “The Spirit Bug.” / photo by Jennifer Contreras

Princess Sarah Negrete was nominated by SAE and is a marketing major. She has been involved with many organizations and activities. She is a member of Sigma Kappa, is a Landis leadership scholar, orientation coordinator, peer advising leader, LEAD, Greek week coordinator, spotlight weekend coordinator, graduation marshal, CPA, an SAE Violet, GMMI coordinator, homecoming delegate, Alpha Lambda Delta and Alpha Chi Honor Society.

Vernetti is a liberal studies major. She has been a resident assistant for Stu-Han and Brandt, she is a member of Alpha Lambda Delta and a Landis LEAD scholar.

More than 100 students attended Pizza and Karaoke Night at Warehouse Pizza for the second Homecoming event of the week.

Free food, drinks and entertainment were provided for the night.

“Wherever there is free food, I’m there,” said Eric Vasquez, senior. “Plus, I’ve been to this event in previous years and it’s always fun.”

Throughout the night, Warehouse was packed with numerous students cheering on those who were singing karaoke.

Some highlights included sophomore Mary Ann Borer’s rendition of “The Bad Touch” and Houska’s version of “Baby Got Back.”

“It was pretty cool for students from ULV to get together like this,” said sophomore Adriana Tostado.