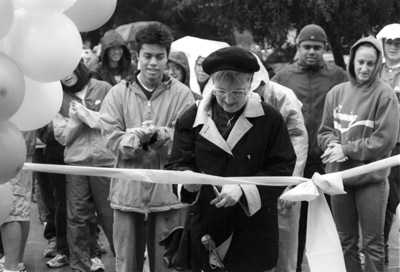 The rain did not discourage participants of the Cancer Walk on Saturday, Nov. 9, which was sponsored by ASF and chaired by ASF senator Wendy Schwartz. Although few ULV students participated in the walk, a group of students from South Hills High School took part, and raised $1,400. The event began after guest speaker Katie Roberts talked about City of Hope and her sown battle with cancer. Andrea Labinger, professor of Spanish, cut the ribbon to signify the start of the walk. / photo by Bailey Porter

In addition to the short but rigorous walk, participants heard speakers, some of whom spoke about their personal battles with the deadly disease.

“People (donated) $20 and they got breakfast, a T-shirt, and ribbons,” said Wendy Schwartz, chairwoman of the cancer walk and ASF senator.

About 30 walkers showed up despite the rain, including students from South Hills High School and the University of La Verne, as well as La Verne residents.

Since November is a “month of giving, we decided to do this event,” said ASF spokeswoman Sarah Negréte.

The mile-and-a-half walk covered much of downtown La Verne and the ULV campus.

Among the speakers was Katie Roberts, mother of a ULV student, who is currently in treatment for cancer.

Roberts’ own mother won her battle with cancer through treatment at the City of Hope.

“My mother was able to beat (it),” Roberts said.

Roberts’ mother died 15 years ago, but cancer had nothing to do with it, she said.

Like her mother, Roberts is being treated at the City of Hope.

“I think that everyone should contribute to places like City of Hope, because no one knows when they are going to need help,” Roberts said.

“Our grandfathers had cancer so we wanted to help,” Tran said.

Walkers on Saturday raised more than $2,000 for cancer treatment and research.

Alley should be closed to traffic
ULV sold on eBay