Richard Gelm, chairman of the history and political science department, spoke last month about the crisis in the Catholic Church and its far-reaching consequences across the United States and abroad.

As part of the monthly series Hot Topics, sponsored by the department of history and political science, Gelm, a scholar of the politics of the Catholic Church, addressed some of the serious challenges the church is facing in light of the recent sexual abuse scandals.

Finances are one of the church’s major problems, Gelm said. Still with strains of settlements to victims that could reach $1 billion, he pointed out the irony that the local Archdiocese still managed to complete its multimillion dollar cathedral in downtown Los Angeles, which opened this fall.

He said perhaps the most important reason for prohibiting priests from marrying was political: “So that the church would not lose the land ownership by giving it to wives and children.”

Gelm addressed some of the complicated social policies for constituents and stressed that the church really should rethink its priorities.

Debate about abortion and homosexuality continue, but there are bigger, more serious issues at stake, Gelm said.

The outdated hierarchical nature of church leaders is one of the most serious problems, as is the fact that the number of Catholics going into the priesthood is in sharp decline.

He said that allowing priests to marry, he said, might help to solve the shortage.

Despite the fact that the church is in the midst of one its greatest crises in its history, Gelm noted that attendance has not decreased.

He also thinks the Catholic Church will overcome its problems, since according to him “one fourth of the world is Roman Catholic.” 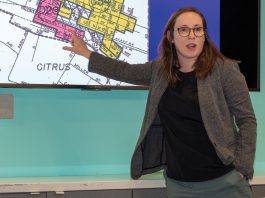 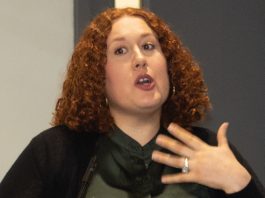 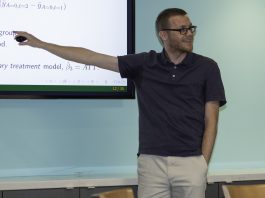 Lecture tackles skews and its effects in data collection