By Campus Times Editorial Board, Christian A. Lopez on November 8, 2002 in Editorials, Opinions 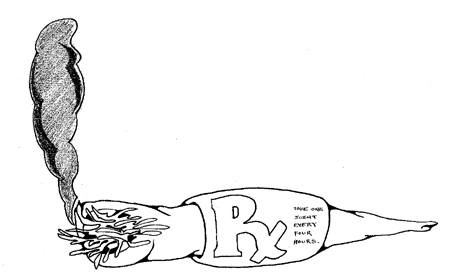 Cannabis. Pot. Weed. Joint. Mary Jane. Blunt. Chronic. However you say it, marijuana has become one of America’s darkest past times. It can ruin a politician’s career, or make an otherwise dorky teenager feel cool. It can give you the munchies, while at the same time make your head spin with paranoia.

Naturally, marijuana has its ups and downs ­ its bad side and its good side. For years, society has shown us the bad side. The side that negatively affects our brains and seizes our memories. The side that makes our heart rate, blood pressure and blood rate change. But what about the good side?

In more recent years, the side the government does not want anyone to know has been revealed. Recent studies have shown that glaucoma patients can be relieved of intraocular pressure in their eyes, and AIDS patients can have their appetite restored by the drug. Like any drug, it has its positive and negative effects.

So the question is, should it be legalized for medicinal purposes? Recent history has shown in polls that the American public is becoming more and more lenient in attitudes toward marijuana. In an October Time/CNN poll, 80 percent of those surveyed believed adults should be able to legally use marijuana for medical purposes, while 72 percent said people should be fined and not jailed for possessing the drug.

All things said, this is a society with millions of consumers of addictive substances such as alcohol and tobacco. So what is the harm in legalizing marijuana as well?

Out of those three substances, marijuana is the only one that can boast such positive effects as helping minimize pain and helping eliminate nausea and vomiting from chemotherapy.

Of course, that is not to say that it does not have its negative effects. Marijuana can also affect mood, behavior, tar levels in the lungs and sexual performance.

According to Time magazine, marijuana may cause lung, head and neck cancer and can possibly affect fertility and it can in very rare instances affect blood flow enough to require amputation. Eating junk food and drinking beer will also have a negative effect on your body; arguably an even worse one at that. So why aren’t Big Macs and Budweiser illegal?

Several initiatives involving marijuana for medical uses were on Tuesday’s election ballots across the country. Three prominent ones were up for election in California, Nevada and Arizona.

Closest to home was Proposition S in San Francisco, which allows the city to grow and distribute marijuana for medicinal purposes. Not surprisingly, the initiative was passed.

According to the San Francisco Chronicle, even the city’s public health chief approves of using the drug and currently prescribes it to some of his patients. The next step in the process toward legalization up north is legislation.

While there was success in California, the two other propositions in Nevada and Arizona were shut down by voters.

If “Question 9” was passed in Nevada, the proposition would have allowed citizens to possess up to three ounces of marijuana. This was voted down 69 to 31 by voters, thus showing that voters believe legalizing marijuana for recreational use has come too little, too late.

Arizona’s was also rejected by a slim margin and also involved medicinal marijuana.

Thankfully, the initiatives on legalizing medicinal marijuana are getting more attention and support. But although San Francisco got its proposition passed, it now will likely be held in the courts; it still has more hurdles to climb.

Hopefully, though, as time goes on, the general public will realize the benefits marijuana can achieve with its patients.