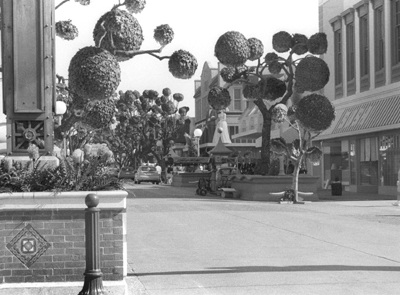 A glimpse onto Second Street in Downtown Pomona transports the visitor to Amville Boulevard on the set of the upcoming motion picture, “Dr. Seuss’ The Cat in the Hat.” A Universal Pictures, Dreamworks and Imagine Entertainment project directed by Bo Welch, the film stars comedian Mike Myers as the Cat in the Hat. Theater release is scheduled for Nov. 21, 2003. The film transformed Antique Row in Pomona to a pastel colored world where giant hot dogs and coaches serve as store signs. Businesses along Antique Row, along with the Western University of Health Sciences on Second Street, participated in the process by transforming their store fronts. The filming took place last week, ending Monday. The scene design and construction for the street began late in summer. / photo by Jennifer Contreras

Leopards clinch SCIAC
Alley should be closed to traffic