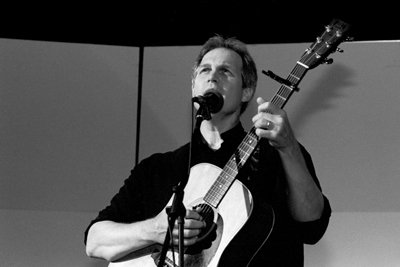 Greg Greenway, originally from Richmond, Va., moved to Boston for its folk music tradition. He draws inspiration from blues, gospel and rock music. Greenway has four solo releases, “A Road Worth Walking Down,” “Singing For the Landlord,” “Mussolini’s Head” and, most recently, “Something Worth Doing.” He performed Friday in Founders Auditorium. / photo by Christian Velazco

The sounds of Greg Greenway filled Founders Auditorium as he captivated the audience with his energetic stage presence and modern acoustic guitar playing.

Greenway’s music is drawn from various genres such as blues, rock and even gospel. His music addressed global events, social justice and the celebrated world leaders who dedicated their lives to peace, which provided the audience with a worthwhile listening experience.

“It was a great show. Greg is such an inspiring performer. I loved the songs,” said La Verne resident Stacie Reader.

University of La Verne Assistant Professor of Biology, Christine Broussard had suggested that the music department include Greenway in their fall concert series.

Broussard became aware of Greenway while she lived in Maryland.

“It was a very well attended show; everyone from faculty to students to fans were there,” Broussard said. “Greg has a lot of songs that relate to social justice. I thought he would be a great addition to our concert series here.”

Greenway, who is originally from Richmond, Va., began writing songs in high school. He turned his attention to music after a visit to Massachusetts during his senior year of college.

After graduating from William & Mary College in Williamsburg, Va., he moved to Massachusetts and formed his first acoustic band. His solo debut was the 1992 “A Road Worth Walking Down,” which was nominated for two Boston Music Awards. He is currently touring for his fourth release, “Something Worth Doing.”