By Bailey Porter, Rima Thompson on December 6, 2002 in News 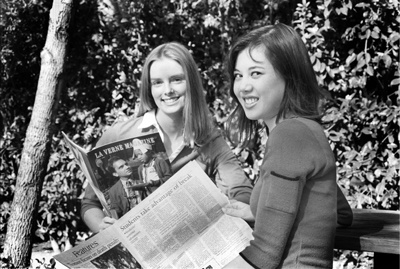 After one semester on the La Verne Magazine staff, Alexis Lahr, left, will be the spring 2003 editor of the magazine. Jaclyn Roco, right, was appointed editor in chief of the Campus Times, which will mark her fourth semester on the staff. / photo by Bailey Porter

University of La Verne journalism professors Elizabeth Zwerling and George Keeler have announced the new editors-in-chief for the Campus Times and La Verne Magazine for spring 2003.

“Jacky has proven herself time and time again as a leader,” Zwerling said of Roco. “She’s a hard worker and very focused. She gets along well with everyone else, and she’s a good journalist. I think she is respected by everyone on staff.”

“I feel really honored to be editor-in-chief, and it isn’t something I will take lightly,” Roco said. Roco is currently serving dual roles as the editor for La Verne Magazine, and as the LV Life editor for the Campus Times.

“It’s going to be hard to follow a long line of great editors, but I am looking forward to the new semester,” Roco said. “(The Campus Times) is going to have a bigger staff next year, so that means we’ll have fewer stories to write and more time to focus on the ones we have.”

Campus Times sports editor Matthew Paulson said he is looking forward to working with Roco next semester. “She will do an outstanding job as a leader,” Paulson said.

Roco said she believes anyone holding an editor position right now for Campus Times could have been chosen for the top job.

“As editor-in-chief my job is to work with each staff member and to oversee the final work before production,” Roco said. “We are a team, yet we are so strong that anyone of the editors could fill (this) position.”

A perfectionist, Roco is originally from Guam and moved here with her family when she was five years old.

At the age of 16 her mother died of lung cancer, and Roco said that it affected her immensely.

“I’ve always been responsible, but her death made me try even harder to accomplish my goals,” Roco said.

Roco has always known she wanted a career in journalism. She even attended a special high school for journalism enthusiasts. Her hope for the spring semester is that the incoming writers will “be proud of what they write.”

As for La Verne Magazine, Keeler said he is confident that Alexis Lahr will be a strong editor.

“Alexis is a superb writer,” Keeler said. “She has excellent judgment, and she’s honest and straight forward in her dealings with people, which makes her a great leader.”

Originally from Colorado, Lahr said she did not contemplate being the editor-in-chief because she has only been on the magazine staff for one semester.

“I was really surprised. It wasn’t something that I expected at all,” Lahr said. “It will be my second semester, so I know it’s going to be a learning experience for everyone.”

Lahr thinks she will have an interesting time working side-by-side with Keeler. “He’s a funny guy, and I think he likes to push me to my limits, which is good because it helps people to learn and grow,” Lahr said.

As for any changes Lahr might make from the way Roco ran things, she said she might make some in the future but as of right now, she does not have any changes planned.

“Jacky is going to be really hard to follow, because I think she did a really great job,” Lahr said. “I don’t have anything at the moment that I would like to definitely change, but I think she’s giving me a really good example to go off of.”

A senior this year, Lahr decided upon journalism after going though a spectrum of other majors.

“Writing is just something that I’ve always liked doing, so I figured I may as well give it a shot,” said Lahr.

Her hope is that as editor-in-chief, she will be able to put La Verne Magazine on the map and the consciousness of the community.

“I want to make it a point to make La Verne Magazine known because a lot of people only think of Campus Times,” she said. “They forget that we have a magazine too because it doesn’t come out as often,”said Lahr.

Keeler said La Verne Magazine is not just a student publication, but also a magazine that is held to high professional level standards.

“I expect no less of Alexis to keep it at that level, and to further us along in the path of excellence,” Keeler said.