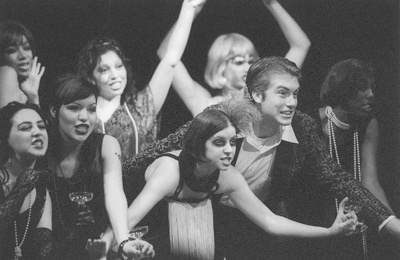 In a song about being “very, very wealthy,” the cast of “Brecht-Fest with Weill” sang and danced to a full house in the Cabaret, Friday night. The show, which ran from Feb. 4 to 8, combined poetry and prose from Bertolt Brecht and music from Kurt Weill and was presented in “Cabaret style.” From left to right are Ayana Moultrie, Brianna Roth, Adrianna Ortega, Sarah Morales, Whitney Wickman, Jonathan Serret, James Darrah and Bjana Washington. / photo by Jennifer Contreras

The University of La Verne’s theater and music department’s presentation of “Brecht-Fest with Weill” was definitely a show within a show.

Steve Kent, director of the institute for conscious acting, directed the Cabaret-style play, and Scott Farthing, chairman of the music department, did the musical direction.

The ambiance of the theater was mesmerizing and delightfully surprised the audience with a club-like atmosphere. Bistro tables replaced the usual rows of chairs, and to complete the setting, waitresses graciously waited on each table.

The costumes complemented the stories being told. Especially noticeable were the costume and makeup design for Chris Smith and Anthony Guerrero, who respectively played Mack, the club owner, and Clive Destrous, a Cabaret performer.

The other actors and actresses seemed to be into the spirit of the play, which made it an enjoyable feature for most to participate in.

“I really enjoyed it, and anyone who hasn’t seen it is missing out,” said sophomore Wanda Groppi.

The Cabaret’s plot, although difficult to grasp at times, touched upon many issues relevant to today. It discussed serious issues like poverty and the roles of women and minorities in society ­ issues that society tends to shun away from.

However, although performers intended to address serious issues, much of the comedy, such as the drag queen, seemed unnecessary due to its distracting nature. Additionally, the audience lacked previous knowledge of the composer and poet, so it was difficult to fully understand the content of the performances.

Despite minor problems in attempts to understand the plot, most audience members greeted them with nothing but praise.

“I think a big part of the play was to reach out to the troubled youth about taking responsibility for their own actions,” said freshmen Cassie Hoeffer.

A desire to connect the music and theater departments, as well as teaching familiar students, inspired Kent to approach Farthing about doing a January class where they would plan and put together an original Cabaret.

They decided to incorporate the music of Kurt Weill and the poetry of Bertolt Brecht. Kent said most of the student population has probably not heard of either of those men. 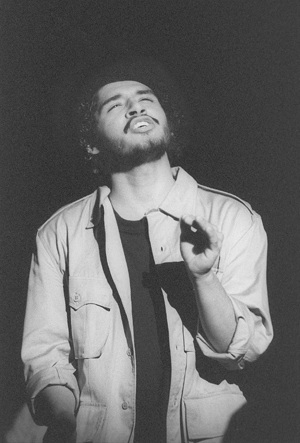 As “Raoul,” junior theatre major Eli Hernandez plays the poet/playwright who directed “Brecht-Fest with Weill.” Hernandez’s character says that he “very much agrees with Brecht’s theories, which deal with making the audience ‘think’ about what they are seeing in the theater and ‘why’.” Twenty-two actors performed various songs, monologues and scenes from playwright Bertolt Brecht and composer Kurt Weil, was showcased in the Cabaret last week. / photo by Jennifer Contreras

“I got permission to use any Kurt Weill songs,” Kent said. “Most people are not aware that Brecht was a poet as well as a playwright. Most people are aware of his plays, which can be a little didactic.”

The cast went through a selection process of the songs and poems to be used, and then the formation of characters began.

Farthing worked with the students in the morning to talk about the songs and interpretation. Kent worked with them in the afternoon, talking to them about putting the show together. After awhile, they teamed up to work together with the performers.

“It was quite an experience developing the characters,” said sophomore cast member Bjana Washington. “Understanding what a Cabaret is was a starting point for us. And then developing and establishing how we were going to portray the Cabaret and do it justice was another main focus.”

Washington played Ashton Lundia, a young undercover journalist interning at a newspaper who was writing a documentary on Cabaret life.

“My character is very sarcastic, easily irritated and one of the showgirls,” Washington said.

Sophomore Christina Massengale, who played Sharlene “Shar” Church, the club owner that looked after the girls, said in order to help develop their roles, each actor came up with an animal that would represent them the best.

“I was a lioness,” Massengale said. “A lioness hunts for her pack and looks over her pack to make sure that they are secure.”

“We started to understand the history and just how amazing theater and Cabaret work could be,” Washington said.

Besides developing characters, the cast was also responsible for designing the set and lighting. Preparation involved working weekday’s during interterm from 10 a.m. to 6 p.m. and on the weekends during the last two weeks before opening night on Feb. 4.

“We became like a family,” Massengale said. “We ate lunch and dinner together, and went to the movies three times.”

The basic premise of the play was the study of Cabaret, Kent said. He wanted the students to get an idea of what it was like to do everything in theater.

“I also wanted to teach them intuitive,” Kent said. “Don’t wait around to be asked to do a role.”

“He tries to inspire us to give us the intuitive to accomplish what we want. He guides us,” Washington said.

Massengale said that she is a better performer because of Kent.

“I am better at trying to be an actress because of Steve. He knows how to pull people in,” Massengale said.

As for Farthing, Massengale and Washington said he was wonderful in helping them mold the songs to portray.

“He made a conscious effort in trying to create the right essence of what the songs were trying to say,” Washington said.

Both Massengale and Washington enjoyed doing the Cabaret and learned a lot from it.

“It was a very fulfilling experience. It helped me understand what it would be like to be involved in a theater company from the ground up,” Massengale said.