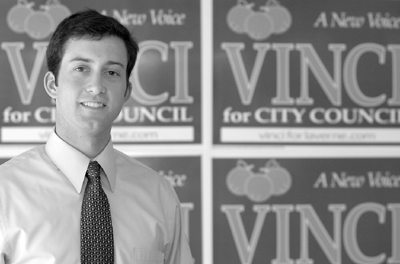 University of California, Los Angeles, graduate, Lucas Vinci, 24, is running again for La Verne city council in the March 4 election. There are five candidates running for the two open city council positions. Vinci lost in the March 2001 election by a certified 50 votes. / photo by Liz Lucsko

At the age of 24, when most young adults are worrying about finding that special someone or climbing the corporate ladder, Lucas Vinci is deliberating over the financial crises facing La Verne.

Ways to preserve the small- town heritage, and improve the city’s safety record are of top concern for this former Bonita High School student and UCLA alumnus, who is currently in a race to become one of the next members of La Verne’s city council.

Most 24-year-olds would shudder at the thought of being in charge of an entire city, but Vinci is not like most. His determination to get the tough questions addressed and answered has set him apart from most young adults and has given him a foothold in the world of politics, one that will lead him into a successful future and carry La Verne along for the ride.

Vinci has called La Verne home for the last 24 years, and he will continue to do so, no matter where his political career takes him.

After receiving his bachelor of arts degree from UCLA, studying World Government at Oxford University in England, and traveling from San Francisco to Orange County to work on the lieutenant governor race, Vinci has always returned to his hometown.

“La Verne is my home and where I want to raise my family,” Vinci said in a city council debate Feb. 6 at La Verne’s community center. The fact that La Verne is such a small town does not sway Vinci from his political aspirations. In fact, preserving La Verne’s hometown appeal is one of his top priorities. By attracting family oriented restaurants and preserving the family owned shops that have long been a part of La Verne’s history, the small town atmosphere will thrive.

Also among Vinci’s list of priorities is developing a teen center, a place that will provide opportunity, security, and responsibility for the teenagers of La Verne, by giving them a place to study, learn and have fun in a positive and safe environment. As a substitute teacher and former football coach at Bonita High School, he has had the opportunity to be a role model to many students and young adults.

“He has been a great inspiration not only to me, but also my students at various points, ” said Desiree Mouzoon, co-worker and friend of Vinci and current English teacher at Alta Loma High School. “They really look up to him as a role model. He’s somebody who’s really out to make a difference in our community.”

One way in which Vinci has began making that difference is through a little tool known as the internet. Vinci has established a community-based web magazine, devoted to encouraging more community involvement in the city of La Verne. Ourlaverne.com is a collection of upcoming events and articles written for, about and by the people of La Verne.

Running ourlaverne.com, being a substitute teacher, doing volunteer work and being a young adult in a tight political race, is no easy task.

“I’m always a busy guy, I never stop working,” Vinci said. Maintaining a social life is not an option, work has become his social life.

A big part of Vinci’s campaign is a plan to bring political conferences and debates back to the public. By using television and the internet to showcase various political meetings, the community will become more involved. Having insight into the process of establishing certain regulations and how the community is actually being managed will allow citizens to voice their opinions and make a difference.

Asking the questions no one else is asking, and actually making people search for answers is what Vinci strives to do. Accepting common responses just because they are what is given is no longer an option. Vinci encourages everyone, especially the youth, to go out and ask these questions and make a difference for themselves and their cities.

“It takes responsibility and creating an opportunity for yourself, so that no matter where you go you’re always trying to learn more,” Vinci said.

On Tuesday, Mar. 4 2003, an opportunity will be given to the citizens of La Verne to spark a change.

By voting the true leaders of our democracy, the voters, will gain their voice.