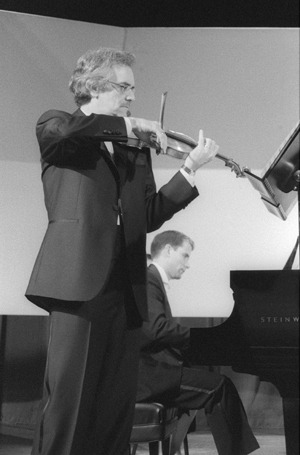 Violinist Paul Stein and ULV faculty pianist Timothy Durkovic performed pieces from composers such as Bach, Brahms and Kreisler during a faculty recital Tuesday. Stein has been performing classical music in schools and libraries since 1985 and has been a member of the prestigious Los Angeles Philharmonic since 1982. / photo by Bailey Porter

The audience of faculty, students and community members, applauded passionately as Durkovic and Stein entered the stage and took their places.

Stein graciously welcomed everyone as he provided a little insight into the night’s venue.

His interaction with the audience was noteworthy as he joked with them and explained a little about each composer.

On stage, the contrast of the piano standing in the middle of the stage against a white backdrop was an inviting prelude to the performance. Preceding each set both performers fine-tuned their instruments.

For their first piece, Stein and Durkovic played “Sonata No. 3 in E Major,” by Johann Sebastian Bach. Stein explained to the audience that each piece would be a representation of a different country, and this first piece represented Germany.

“(Bach) opened up a realm of imagination that is so pure,” Stein said.

It was a soothing number that captivated the audience as they attentively watched and listened, applauding loudly after each piece.

Another noticeable piece played was “Praeludium and Allegro” by Fritz Kresler, who Stein said was responsible for bigrading on every note.

The pieces performed alternated between being somber or upbeat and culminated into a dramatic ending with “Presto Agitation” by Johannes Brahms.

Stein’s performance was amazing. He played the violin with such ease and confidence that he could have easily performed blindfolded.

Durkovic’s piano playing was equally fantastic. There was a noticeable comfort in his playing.

The interaction between Stein and Durkovic was remarkable, as they played off each other, demonstrating an appreciation for working together.

“It’s fun, and I love working with him,” Durkovic said.

“I worked with him once before, but this is the first big concert we’ve done together. We did a little library concert a while ago.”

The rehearsal and on stage performance of the pair was unmistakable evidence of how much Stein and Durkovic clicked.

They laughed and joked with each other, as they fixed minor problems in reference to where Stein would stand, the sound quality in the auditorium and the lighting.

“I was very impressed with how relaxed they seemed while playing. You could see Timothy floating on the keyboards, and I saw a sense of humor in Mr. Stein’s playing.”

“My favorite part of the recital was when they decided to play the fifth piece second because it had such a delicate sound and harmony,” said junior Clariza Castilla de Ruiz.

“You could tell they had a sense of respect and admiration for each others talent.”

Stein teaches violin at ULV, while Durkovic is an adjunct music faculty and artist in residence at ULV.

The next faculty recital will be at 8 p.m. on Thursday, March 6 in Founders Auditorium.

It will feature faculty members Jacqueline Petitto on piano and Jason Gramer on trumpet. Admission is $5 for the general public and free for ULV students.