By Bailey Porter, Lori Waters on February 14, 2003 in Sports, Tennis 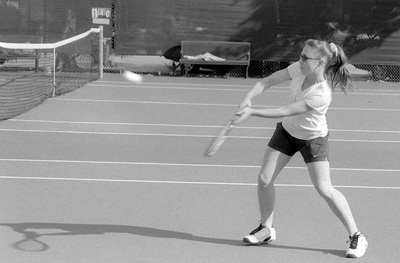 Desiree Whipperman, junior, plants her feet firmly as she follows through on a backhand shot to her Sagehen opponent. The ULV women’s tennis team played Pomona-Pitzer on Friday. The Leopards were shutout by the Sagehens, 8-0. / photo by Bailey Porter

The University of La Verne women’s tennis team was defeated by the Sagehens of Pomona-Pitzer on Feb. 7.

Michelle Fontanez and Lacy Cascadden teamed up and played a tough game, and, although there were many solid plays, the Leopards were defeated 8-0.

“I think that we should work on our volleys and serves,” Fontanez said.

While that was the action on court No. 1, on court No. 2, Paige Hanawalt and Michelle Tang played a competitive doubles match.

Though they were defeated 8-2, Hanawalt and Tang played a tough game with many great rallies.

“We played well, though there were a lot of forced errors on our part,” Tang said.

On court No. 3, Desiree Whipperman and Emily Hofer were defeated 8-0.

Harrison also said that Pitzer is a pretty deep team. They have a lot of competitive athletes.

On Feb. 4, the Leopards battled Biola University. Although they were defeated, ULV’s top three players were Cascadden, Tang and Fontanez.

“They played a really good singles game, and they had a lot of great opportunities,” Harrison said.

“This season should go well, though we are still in the process of building the tennis program at La Verne,” Harrison said.

“We’ve got a really good group of girls this year; we’ve been doing a lot of stuff on and off the court to build better games.”

ULV’s next match will be against Occidental College at 2 p.m. tomorrow in Los Angeles.